Catch the Live Scorecard of the 2nd ODI between Ireland and Scotland here.

Ireland and Scotland are engaged in a three-match One-Day International (ODI) series, as both sides prepare for the ICC World Cup 2015. These two teams played their first ODI at Dublin on Monday. Ireland cruised to a comfortable seven wicket victory over Scotland with 80 balls to spare. The Irish skipper, Kevin O’Brien, showed his class and composure and led his side from the front. Ireland had to chase down a modest total of 173 runs. Now, they gear up for the second ODI on Wednesday. Catch the Live Scorecard of the match here

The Scottish team has a mixture of youth and experience. Much was expected out of Richie Berrington and Majid Haq, two of their most experienced campaigners, but they failed miserably in the last game and they would look to bounce back to form in the next match. Michael Leask put up a promising show with his gritty half-century which helped Scotland reach a better score than one expected. At a point it looked like they will be bundled out for a score less than 150, it was Leask who steadied the Scottish innings somehow. Scotland skipper Preston Mommsen might promote Leask up the order because of his performance. Calum Macleod looked promising upfront as well, so he too would like to get some runs at the top order. Josh Davey was the only bowler who bowled a good line and length and he was economical too. 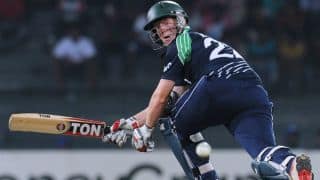