The final of CCL 2015 will be played on February 1 at Hyderabad.

On January 25, Bhojpuri Dabanggs will meet Bengal Tigers in an exciting tie which will be played at Ahmedabad. Earlier on the same day Mumbai Heroes played against Chennai Rhinos also at Ahmedabad.

The much awaited Celebrity Cricket League (CCL) began on January 10, 2015 with the inaugural match being played between Mumbai Heroes and Veer Marathi at Brabourne Stadium, Mumbai. CCL 2015 has eight participating teams including Telgu Warriors, Bhojpuri Dabanggs, Karnataka Bulldozers, Bengal Tigers, Chennai Rhinos, Veer Marathi, Mumbai Heroes and Kerala Strikers. CCL began in 2011 and has grabbed attention from a large audience since then.

The final of CCL 2015 will be played on February 1 at Hyderabad. 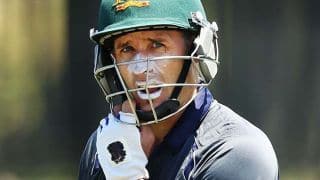