Vidarbha, in a bet to create history, will play their maiden Ranji Trophy 2017-18 while Delhi will aim for their eighth title as the teams face each other at the Holkar Stadium, Indore starting Friday.

Vidarbha, in a bet to create history, will play their maiden Ranji Trophy 2017-18 while Delhi will aim for their eighth title as the teams face each other at the Holkar Stadium, Indore starting Friday. The live telecast of the final match will be on Star Sports. The live cricket streaming of the match will be available on Hotstar. Delhi have reached the final for the first time since the 2008-09 season.

Vidarbha defeated heavyweights Karnataka in a close semi-final. Rajneesh Gurbani put up brilliant bowling performance, bagging 12 wickets that restricted Karnataka at 301 and 313 respectively to snatch a 5-run victory. Among the batsmen, Ganesh Satish, Apoorv Wankhade and Aditya Sarvate have been performing consistently and will be interesting to watch.

In the other semi-final, Delhi thrashed Bengal. Delhi took the first innings lead, putting up 398 in reply to Bengal’s 286. Bengal crumbled in their next innings for 86 as Nitin Saini and Kulwant Khejroliya bagged 4 wickets each. Delhi posted a victory by an innings and 26 runs to qualify for the final.

We are not focusing on opposition. Our bowlers and batsmen are doing well, that s it. It is a big opportunity to play any final. This is my second season as the captain, and I will try my level best, a confident pant said ahead of the final to The Hindu.

“The discipline in the team, the way the routines and preparations we had before coming into the Ranji Trophy. Except the nets, the match simulations we did, and one more thing is that we are a really happy unit. We all are really happy and we are enjoying our cricket very much. We always used to enjoy but I don’t know why we all believe that this season the trophy is ours. As I mentioned earlier, after quarter-final or the semi-final, that I want to have the feel of the trophy in my hands. I want to have that bite of success so let’s see,” Faiz Fazal, Vidarbha skipper, told EspnCricinfo. 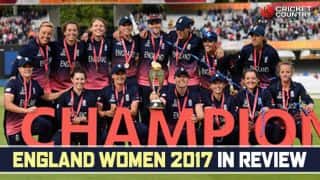