David Warner-led Sunrisers Hyderabad are the only side so far assured of a place in the semi-final of IPL 9.

Rising Pune Supergiants (RPS) and Delhi Daredevils (DD) lock horns in Match 49 of Indian Premier League (IPL) 2016 at Visakapatnam on Tuesday. You can catch the live streaming and free telecast of this all important game on Hotstar.com. With three games to go, DD are on the sixth place with six wins off 11 matches and to qualify for the final four of IPL 2016, Zaheer Khan-led Delhi have to win at least two matches. On the other hand, RPS have already been eliminated of this ninth edition of IPL they sit at the bottom of the points table with three wins off 12 matches. LIVE CRICKET SCORECARD: RPS vs DD, IPL 2016 Match 49 at Visakhapatnam

David Warner-led Sunrisers Hyderabad are the only side so far assured of a place in the semi-final of IPL 9. DD next play Sunrisers and Royal Challengers Bangalore (RCB) which surely are superior than Delhi, which is why their win against Pune on Tuesday will be crucial if they go on to lose a fixture from the two matches later.

After a superb win against table-toppers Hyderabad, Delhi faced a thrashing at the hands of Mumbai Indians that saw a dip in their high confidence. While chasing Mumbai’s 207, Delhi managed only 126 in 19.1 overs. Delhi’s ability to chase big totals remains in doubt, but keeping in mind that RPS batsmen are not expected to go ballistic with the bat, this is one clash which they can enter as favourites and dominate throughout. The likes of MS Dhoni, Usman Khawaja, Ajinkya Rahane and George Bailey are among the power hitters in the RPS dugout. 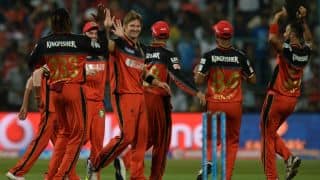 IPL 9: What Delhi, Bangalore and other teams need to do to enter IPL 2016 playoffs