CricketCountry's coverage of the IPL 2013 spot-fixing and betting scandal hearing in the Supreme Court.

Aditya Verma spoke to the media after the hearing. “Next Monday and Tuesday the court will hear on the matter and may also give the decision. The lawyers, Harish Salve and Nalini Chidambaram did the talk in the court today. Being a petitioner I cannot understand why the BCCI and N Srinivasan are objecting on the matters that have been found out. I believe all the documents that BCCI have submitted today; I can say that they were manufactured documents.

“The court was also being tried to influence on the name of a current central minister. Mudgal Committee has given his report, then why is BCCI objecting? Why is BCCI not making the tainted officials and cricketers’ name in public? I am saddened and next Monday and through my lawyer I will push for the report to be made public.

“The cricket governing body in the country is saving the players, officials and Srinivasan. When the committee has given the report to the Supreme Court then why the names should not be made public? On Monday I will push for the report to be made public but those who bring shame to cricket wouldn’t be spared. The court will clean up the game and I hope that Supreme Court will emerge as the winner, as a ‘Man of the Match’.
They are naming a central minister again and again and the court objected why are you trying to influence through a central minister? I cannot understand why are they trying to do so? ”

The hearing has been adjourned till next Monday i.e. December 8, 2014.

Times Now reports that N Srinivasan defended himself and said that he had consulted Sharad Pawar before going in to buy the IPL franchise.

Hello and welcome to CricketCountry’s coverage of the IPL 2013 spot-fixing and betting scandal hearing in the Supreme Court. Last week, the apex court asked for fresh elections in the Board and Control for Cricket in India (BCCI) elections and the tainted officials to step aside, according to emerging reports. Basically a new BCCI should be setup.

The Supreme Court observes that members of India Cements cannot contest in the BCCI elections, which is basically preventing the N Srinvasan from returning to the Indian Cricket Administration fold. The Supreme Court has said that IPL franchise Chennai Super Kings (CSK) must be disqualified.

According to IANS, the Supreme Court on November 27 suggested that the Mudgal Committee, that probed the allegation of betting and match-fixing in IPL 2013 decide on the nature of punishment for Gurunath Meiyappan and others named on its report in accordance with the BCCI’s rules and regulations, including the anti-corruption code.

Senior counsel CA Sundaram, appearing for the BCCI, agreed with the suggestion. He earlier had requested the court to decide on an external commission to determine the extent of punishment so that there is transparency about the verdict.

“Let the Mudgal Committee be asked to take action and let there be a logical conclusion of the issue. Let them discharge the function of imposing penalty”, said an apex court bench of Justice T.S.Thakur and Justice Fakkir Mohamed Ibrahim Kalifulla. 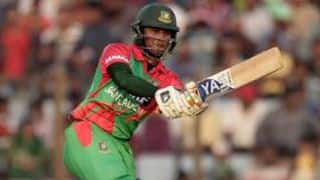