South Africa pacer Lonwabo Tsotsobe says he is working hard and eagerly waiting for an opportunity to break into the playing XI of the Test side. 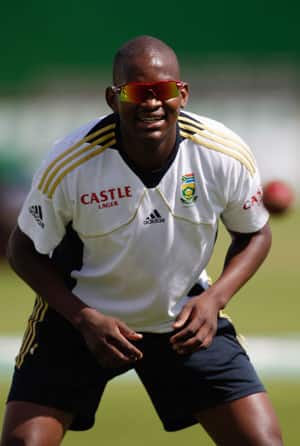 South Africa pacer Lonwabo Tsotsobe says he is working hard and eagerly waiting for an opportunity to break into the playing XI of the Test side.

Tsotsobe, who missed the first two Test matches against England, made a strong claim with his four-wicket haul against Derbyshire County Cricket Club in the drawn two-day tour match.

“We have 15 good players in the squad. I just keep working hard so that when my opportunity comes I can take it with both hands.

“Every time I prepare I prepare as if I am going to play and I know if someone gets injured I am ready to take my chance,” Tsotsobe was quoted as saying by Sports24.

“It s also always a good thing to have competition amongst your team mates, it pushes everyone to their limits when players outside the XI are performing,” he added.

South Africa boasts of a strong pace attack consisting Morne Morkel, Dale Steyn and Vernon Philander, who can contribute with the bat as well.

Tsotsobe also claimed that South African players are calm and relaxed ahead of the third Test against England at Lord s.

“The players are calm. I think that is what got us through the first Test, we were calm and cool. We have moved into a zone where we are not too excited about the end result,” he concluded.

England focused only on retaining No 1 status in Tests, says Alastair Cook