Luke Wright registered the fourth highest individual score in Twenty20 history after he smashed an unbeaten 66-ball 153 for Sussex against Essex in the NatWest T20 Blast on Friday. It was also the highest domestic T20 score. Chasing 226 to win, Wright hit 12 fours and 11 sixes in his innings. Wright is fourth on the list with Chris Gayle (175 not out), Brendon McCullum (158 not out), Aaron Finch 156 ahead of him.

Wright’s fierce hitting helped him reach his century in only 26 balls and he got to his hundred in 47 balls which involved 11 fours and five sixes. In the next five overs, Wright hammered six sixes and a four to help Sussex cruise to the target of 226.

Very few can forget the record score by Gayle as he pummeled Pune Warriors India bowlers into submission in 2013 at Bangalore. The second highest score also comes from the Indian Premier League (IPL) when McCullum hit a breezy 158 in the inaugural match of the first edition of IPL in 2008.

Below are the top 10 highest individual scores  in T20 history 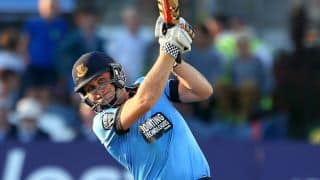