Unheralded Australian debutant Nathan Lyon took a stunning 5-34, including a wicket with his first ball, as Sri Lanka's batsmen capitulated in the dramatic first Test in Galle on Wednesday. 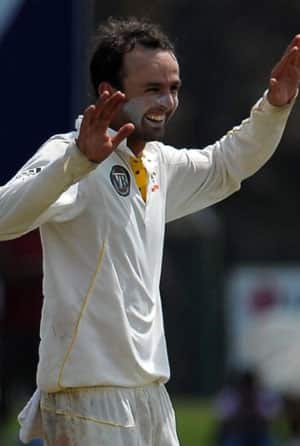 Unheralded Australian debutant Nathan Lyon took a stunning 5-34, including a wicket with his first ball, as Sri Lanka’s batsmen capitulated in the dramatic first Test in Galle on Wednesday.

Sixteen wickets fell on the dusty, deteriorating track during an eventful second day’s play which ended with the tourists enjoying a commanding lead of 283 runs with four wickets in hand.

Seamer Shane Watson claimed three wickets in 10 balls and another newcomer Trent Copeland struck in his first over as Australia, restricted to 273 on the first day, skittled Sri Lanka out for 105 by tea.

Coming in for their second innings the Australians also found runs hard to come by, collapsing to 115-6 when bad light forced stumps to be drawn.

The tourists lost Watson first ball and former captain Ricky Ponting for four, before skipper Michael Clarke (60) and Michael Hussey (15) put on 49 for the fourth wicket.

Left-arm spinner Rangana Herath spiced up the contest further when he removed both batsmen in two balls and dismissed Brad Haddin in his next over as Australia slipped from 110-3 to 112-6.

Usman Khawaja was unbeaten on two and Mitchell Johnson was on three as Australia look to turn the screws on the hosts when play resumes on Friday.

Off-spinner Lyon never looked back after removing Kumar Sangakkara with his first delivery in Test cricket — the first Australian in 117 years to achieve the feat. Brought on after the morning drinks break, the 23-year-old had Sangakkara edging the first ball towards the slips where Clarke dived to his left to take a low catch.

Lyon, who served on the Adelaide Oval groundstaff until a year ago, then ran through the tail to justify his much-criticised selection for the tour after just four first-class matches.

He is only the 14th bowler in history to take a wicket with his first ball in Test cricket, and the second Australian since Arthur Coningham did it against England in 1894.

Copeland, asked to share the new ball with Ryan Harris ahead of the experienced Mitchell Johnson, saw his first delivery hit for a boundary before the second fetched him a wicket.

Sri Lankan captain Tillakaratne Dilshan, who had disdainfully smacked the first ball to the cover fence, attempted a similar shot off the next, but found Ponting standing in the way.

The 36-year-old former captain dived to his right at short cover to snare a brilliant catch. Paranavitana and Samaraweera added 43 for the fourth wicket, before Watson and Lyon swung the Test Australia’s way.

When Lyon took a return catch off last man Chanaka Welegedara to claim his fifth wicket, he had the best figures by an Australian debutant since Jason Krejza’s 8-215 against India in Nagpur in 2008. (AFP)