Zol, who has a troublesome groin, but are hopeful that he will be fit for their Ranji Trophy quarter-final.

Maharashtra are a bit concerned about the fitness of India’s triumphant under-19 captain Vijay Zol, who has a troublesome groin, but are hopeful that he will be fit for their Ranji Trophy quarter-final against defending champions Mumbai, commencing here on Wednesday.

Zol, who led the country’s colts to the Asia Cup title with a century in the final against arch-foes Pakistan in Sharjah on Saturday, has consulted a doctor and Maharashtra would know tomorrow whether he is available for the game, said coach Surendra Bhave here today.

“There’s a little bit of a concern. Dr Abhishek Joshi had a good look at him…will know tomorrow afternoon if he will play. He complained of a little bit of problem in groin when he got that 100 in the (Asia Cup) under-19 final,” said Bhave after the team’s practice session today at the Wankhede Stadium.

Bhave though was optimistic that the one-down batsman would take the field in this high-profile Indian “War of Roses”.

“Sure he will be alright. He did come here. We had to let him go as he had a long flight. Flight from Bangalore to Mumbai was 2 hours late. He has taken well to first class cricket and is one of the form players,” said the visiting team’s coach.

The former national selector sounded confident ahead of the Group C toppers’ clash against the 40-time champions.

“They are ready for this stage. Have played confident cricket and believe they can continue. In the knock out [stage] you get good teams anyway. We are best prepared this time to play in quarter finals than in previous years,” he said. 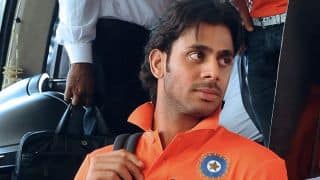 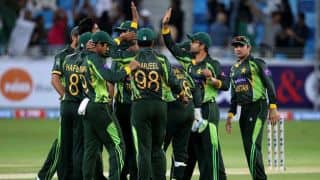