Thando s progress in U-19 cricket has been fast-tracked.

Makhaya Ntini s son Thando has been drafted in South Africa s U-19 squad for 2018 World Cup. Thando s progress in U-19 cricket has been fast-tracked. He came into prominence through his four-wicket haul against West Indies in Durham. He reduced West Indies to 222 for 8 that South Africa chased down with ease with 53 balls to spare.

Thando plays cricket for his school Whynberg High as well. At the same time Makhaya junior has been training at Western Cape Academy as well. Cricket South Africa s (CSA) Tertiary and Youth head Niel Momberg was thoroughly impressed by Thando s ability and told thesouthafrican.com, Thando hits good areas regularly and nips the ball around, thereby creating pressure. I think he can bowl at 135 km/h once he grows a bit stronger. Sure, he is Makhaya Ntini s son, but what really strikes me is his natural talent. One other thing I like about him is his action. He has a very good action

The young bowler had also caught the attention of Western Province Academy coach Siya Sibiya. Thando, who played some trial games for colt, notched up some decent scores. Sibiya was impressed by Thando s all-round skills.

Meanwhile, the squad will be head by Raynard van Tonder for the second time. During the series against West Indies under van Tonder s captaincy, they lost the five-match series by 2-3 in June.

On captaining the young guns in the World Cup, van Tonder told sports24.co.za, I m really looking forward to captaining the boys again, I enjoyed stepping into the leadership position and learned a lot. Now I want to take all those lessons and put them into this upcoming triangular series. The guys are excited and I m also really excited, England and Namibia are tough competitors and it s exactly what we need building up to the World Cup. 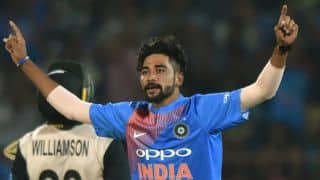