Lasith Malinga marked his return to the Sri Lankan side in stirring style, setting the tone with a vicious yorker in his first spell, snapping a stubborn partnership in his second, and then ripping the lower order out in a devastating burst in his third, which included a stunning hat-trick. 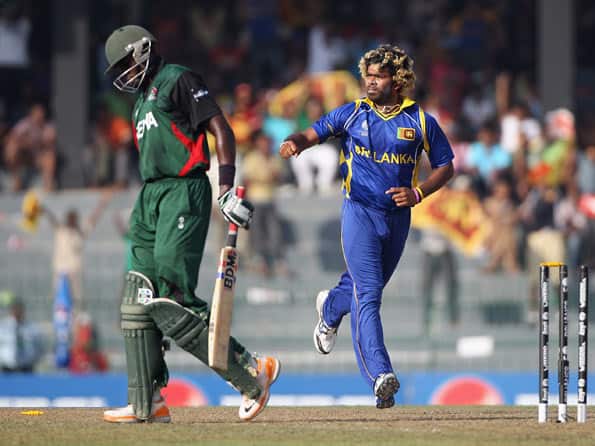 Lasith Malinga marked his return to the Sri Lankan side in stirring style, setting the tone with a vicious yorker in his first spell, snapping a stubborn partnership in his second, and then ripping the lower order out in a devastating burst in his third, which included a stunning hat-trick.

During the Kenyan innings the record for slowest fifty of the tournament was set by Collins Obuya and then broken by his brother David, but once Malinga separated the two at 102 for four, the innings gave way in stunning manner.

Kenya had only two batsmen who looked unhurried and in some semblance of control during the course of their innings. Collings Obuya and David Obuya scored half-centuries that came at strike-rates of 52.00 and 48.11 respectively, but their 94-run partnership came at a time of crisis. Nuwan Kulasekara had rapped Maurice Ouma s pads with his second delivery and Malinga nearly crippled Seren Waters with a searing yorker, and after 14 minutes of the start of Kenya s innings, the situation was grim.

Collins Obuya, one-time legspinner and now top-order batsman, found himself with little license to attack with the score nine for two. And so began a dour period of defence littered with singles the Obuyas went 94 deliveries without hitting a boundary and some stubbornness against a bowling attack that offered little room to breathe. It wasn’t exciting stuff, but it represented a definite improvement.

David Obuya s obdurate innings consisted of a lot of defending, some clean driving, a bit of cutting, and the odd heave between midwicket and mid-on. As the pair pinched runs and struck the odd boundary, matters became less dire. Collins Obuya s first three boundaries didn t go where he intended them, but there were some quality cuts and sweeps. David Obuya produced some strokes of authority: a full toss from Malinga was smashed past mid-off, and Angelo Mathews was driven through the covers with lan. Kenya survived two appeals, and that added to Sri Lanka s frustration.

The defiance ended when Malinga returned in the 32nd over and cleaned up Collins Obuya with another peach of a yorker. Steve Tikolo then chased one and picked out backward point (120 for 4), David Obuya slog-swept Muttiah Muralitharan to the deep, and Jimmy Kamande took off for an unnecessary single and was run out (128 for 6).

That was nothing compared to what happened next. With four fast, curving, deliciously full deliveries, Malinga shattered stumps and Kenyan spirits to trigger a collapse of four wickets for five runs. It was devastating stuff. Tanmay Mishra limped off after a yorker crashed into his boot, Peter Ondongo didn t even spot the shooting yorker that flattened middle stump, and Shem Ngoche became Malinga s hat-trick victim with a similarly unplayable delivery. The final wicket came in identical manner as Malinga speared a fast yorker under Elijah Otieno s bat.

Sri Lanka missed Malinga against Pakistan, and with him at his crushing best, look a totally different side.