Chennai: India A batsman Manish Pandey today said that lack of “better planning” and decent outing with ball hampered the home team’s chance of posting a win against Australia A here. Australia A batsmen once again showed their prowess in tackling the Indian spin attack on a difficult track as they comfortably beat the hosts by three wickets to enter the final of the tri-series cricket tournament here.

“I thought we were always 20 runs short till the end. But to reach whatever we did was pretty okay. It was a decent total on the board. I thought we could have bowled a little better and we should have planned a little better. We did not bowl bad but required little more planning,” said Pandey at the post match press conference. Hiken Shah approached Bombay High Court to challenge suspension by BCCI

Asked if the Indians conceded the advantage after reducing Aussies to 178 for six at one stage, Pandey said: “Cricket is a game of uncertainty and anything can happen.” Sachin Tendulkar’s Bharath Ratna will not be revoked: Madhya Pradesh High Court

“There were a couple of dropped catches. May be if we had taken those, we could have won the game. It is all about taking those small chances. Our bowlers did pretty well. I think we need complete team effort to win all the games. When your bowling or batting does not click, fielding is the area where you have to perform.” India, Pakistan and West Indies in same group for ICC World T20 2016: Reports

Pandey insisted that the Indian batsmen did not take the Australian spinners for granted. “We would never take anything for granted. I thought in our first match against them, they made 300 plus and they played very well and used their feet well. In the finals, if they play in similar fashion we have plans against them,” he said. Talking about his goal, Pandey said he would like to be a part of national team’s playing XI more. India undergo rigorous training ahead of Sri Lanka Test opener at Galle

“One of my dreams came true this year when I was selected for the Zimbabwe tour. It was a good start for me. The debut game went pretty good for me. There has to be a start somewhere which I actually got. It is high time that I keep performing from here on. I would like to keep performing and be there for longer period of time. That is going to be my goal,” said Pandey. Ashton Agar, batsmen help Australia A clinch three-wicket win against India A

On his collusion with Matthew Wade, he said: “I got three stitches after that incident and injections too. But these are part of the game.” 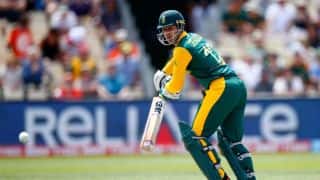 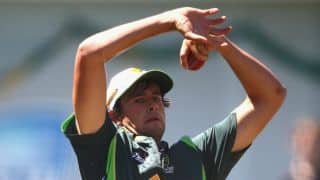