Openers Manish Pandey and Mayank Agarwal hammered a half century each as Karnataka scored a thumping nine-wicket victory over Goa in the South Zone leg of the Syed Mushtaq Ali Trophy T20 zonal tournament at Shimoga on Sunday.

Openers Manish Pandey and Mayank Agarwal hammered a half century each as Karnataka scored a thumping nine-wicket victory over Goa in the South Zone leg of the Syed Mushtaq Ali Trophy T20 zonal tournament at Shimoga on Sunday.

Karnataka lost Agarwal in the 16th over when the team total was 108, needing nine more runs to win.

Agarwal belted four boundaries and two sixes in his knock as he guided Karnataka to 121 for one while Pandey clobbered two fours and three sixes.

Goa put to use all their five bowlers but only SA Badiuzzmama could bag the lone wicket of Agarwal.

Earlier, Goa started their innings badly losing five wickets for 40 runs and could only post 116 all out in 18.3 overs. Keenan Vaz top-scored with 41, while RU Shukla and R J Pinto made a quick 20 each.

Vinay Kumar and Abhimanyu Mithun bagged two wickets each, while Stuart Binny, Pandey and right-arm off-break bowler Krishnappa Gowtham chipped in with one wicket each.

In another encounter, Tamil Nadu beat Andhra Pradesh by eight wickets as they successfully chasing down a target of 107, but before losing two wickets.

Abhinav Mukund and K B Arun Karthik saw their team race past Andhra’s target after Tamil Nadu lost two wickets for 35 runs in the eighth over.

Mukund scored 33 runs off 33 balls with two hits to the fence, while Karthik made 38 off 34 balls with four boundaries.

Srikkanth Anirudha and in-form batsman Baba Aparajith took the team’s total to 30 in 5.5 overs, before the later was caught by B Sudhakar off AG Praveen. Soon Aniruddha left the scene after making 19 off 25 balls with two boundaries to his credit.

Right-arm medium pacer Praveen was the only successful bowler for Andhra picking up two for 17.

Earlier Andhra managed 106 all out in 19 overs. At one stage, they were looking good at 100 for four, but lost their next six batsmen for just six runs, the chief wrecker being Laxmipathy Balaji.

In another match, Kerala defeated Hyderabad by six wickets as they chased down the target of 134.

Right-hand batsman Nikhilesh Surendran top-scored with 53 runs off 51 balls with four hits to the fence.

Openers Surendran and Sanju Viswanadh gave a good start posting 55 runs for the first wicket. But soon Kerala were pushed on the backfoot when they lost Sanju (30 off 27 balls) and Rohan Prem when the total was 57.

Surendran and Baby Sachin, who had a good outing in Deodhar Trophy, consolidated and took the total to 123 before the former was caught by C V Milind off P Kanishk Naidu.

Sachin was second-highest scorer with 37 off 28 balls with four boundaries. Naidu, Milind and Akash Bhandari picked up one wicket each.

Earlier, Hyderabad could manage 133 for six in their stipulated 20 overs.

None of their batsmen had a major flourish at the top. G H Vihari top-scored with 34 in 24 balls with four boundaries, while Akshath Reddy (19), Ravi Teja (28) and T Suman (23) made useful contributions.

P Prashant was the top wicket-taker for Kerala with figures of two for 20 in four overs. 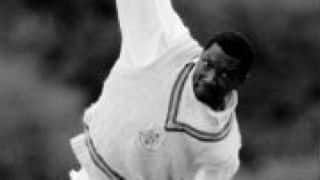 Roger Harper: One of the greatest fielders of all time