Manish Pandey has got opportunities but has not been able to cement a place in the limited overs set-up, having represented India in 12 ODIs and eight T20Is.

New Delhi: A “disappointed” Manish Pandey is targetting a return to the Indian team in the ODI series against the West Indies later in June after a muscle tear robbed him of the opportunity to feature in his maiden Champions Trophy. “It is disappointing for sure to miss a tournament like the Champions Trophy but injuries are part and parcel of the game. I am on my way to recovery and should resume training in a week or two,” Pandey told PTI. “The target is definitely to be fit by the time the West Indies series begins. I am waiting for a scan report [for a muscle tear on the left leg] but at the max it would be take me couple of weeks to be fully fit,” said the stylish batsman. ICC Champions Trophy 2017: Dinesh Karthik to replace injured Manish Pandey

Pandey suffered the injury during a practice session ahead of Kolkata Knight Riders’ Eliminator against Sunrisers Hyderabad in the IPL in May. It remains to be seen whether the selectors will send a full strength squad to the Caribbean or give an opportunity to the youngsters. The 27-year-old Pandey has got opportunities but has not been able to cement a place in the limited overs set-up, having represented India in 12 ODIs and eight T20 Internationals. Dinesh Karthik replaced him in the Champions Trophy squad and was impressive in the warm-up against Bangladesh.

India play five ODIs and a T20 International in the West Indies with the series-opener to be played at Queen’s Park Oval on June 23, five days after the Champions Trophy final in England. The West Indies, who were in the top-8 of the rankings by the cut-off date, did not qualify for the ongoing ICC event. 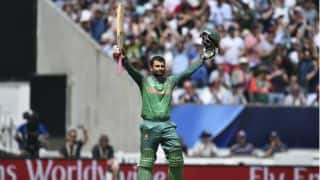