Delhi-boy Kalra emerged as the man for the big occasion, scoring a sublime 101 not out off 102 balls in the final.

New Delhi: ICC Under-19 cricket World Cup final hero Manjot Kalra on Monday met Chief Minister Arvind Kejriwal who congratulated him for his performance. India, earlier this month, lifted a record fourth U-19 World Cup trophy after an eight-wicket rout of Australia in the final of the tournament held in New Zealand. Delhi-boy Kalra emerged as the man for the big occasion, scoring a sublime 101 not out off 102 balls in the final. The Delhi government will also felicitate the young cricketer who made the entire country proud, an official said.

“We all are very proud of you (Kalra), not only Delhi but the entire nation is looking forward to your career ahead,” a statement quoted the chief minister as telling Kalra during the meeting. In the statement, Kejriwal said the Delhi government was always there for any kind of assistance. Kalra was declared the man of the match in the finals. He has also selected in the ICC team of U-19 Cricket World Cup. 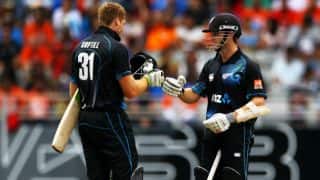