Manoj Tiwary: I believe this subtle change has worked wonders for me

Manoj Tiwary: I believe this subtle change has worked wonders for me

He also said that earlier, comparisons used to bother him but now he has learnt the art of moving on.

Manoj Tiwary is back in national contention with some impressive knocks in domestic cricket and the Bengal batsman attributes his recent form to a “change in technique” along with a “sea change in attitude”.

Tiwary’s sequence of scores in the last five List A innings read as 57, 130, 56, 151 and 75 with Deodhar Trophy victory being an icing on the cake and a call-up in the 30-man World Cup probables list was inevitable.

“At the start of the season, I went back to the nets with my childhood coach Manabendra Ghosh and worked on my technique against pacers as well as spinners. Against pacers, I changed my stance and used a higher backlift. Earlier, I used to have a comparatively much lower backlift and it meant, I had lesser reaction time against pacers. With a higher backlift, I get more time to play my shots,” the 29-year-old told PTI.

“I believe this subtle change has worked wonders for me even during India A’s tour of Australia, earlier this year. I watched videos of my matches and discussed and practised in the nets. When I felt comfortable, I used that stance during the matches,” said Tiwary.

The talented right-hander, who has got chance to play only nine ODIs and three T20 Internationals for India in the last seven years, then went on to explain the subtle changes that he brought about in his technique while negotiating the spinners.

“My natural game is to attack the spinners and there is no secret that we all need to give them the charge. The change that I made is to remain as low as possible while trying to loft the spinners.

“The lower the centre of gravity of the body, the more distance you can hit the ball. As you can see, I have hit close to 20 sixes (19) in last five games,” said Tiwary.

Being in and out of the Indian team has made him more pragmatic as a person and he doesn’t want to look too far ahead.

“Yes, the World Cup probables was there at the back of my mind. But if you let those things affect you, then you can’t focus on the job. My job is to score runs. Yes, I want to play for India but I have had injuries at the wrong time. But is there a point in crying over spilt milk? It’s better to look ahead and keep performing. I just want to do that,” said Bengal’s top performer for the past six years.

He also said that earlier, comparisons used to bother him but now he has learnt the art of moving on.

“I won’t deny there was a point in time when comparisons and things being said about my batting used to affect me. Not anymore though. I believe that injuries have taught me a lesson. That is to be more patient and never lose faith in hardwork. It’s your commitment that stays with you till the end,” Tiwary signed off. 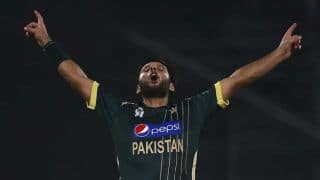