Manoj Tiwary has reportedly been named Bengal skipper for the upcoming domestic season.

Manoj Tiwary has reportedly been named Bengal skipper for the upcoming domestic season.

As per a report in TOI, the new selection panel of Cricket Association of Bengal (CAB) in its first meeting on Friday named Tiwary captain for the 2018-19 season.

Tiwary had expressed disappointment after being overlooked for the Duleep Trophy that starts next month. He was recently snubbed by the BCCI from six representatives India squad despite boasting of a record-breaking domestic season.

It was being speculated that the 32-year-old doesn’t want to lead the team but he was in attendance during the meeting and denied that he wanted to be quit captaincy. “Yes, I am disappointed at not being picked for nay Duleep Trophy teams, but I never asked to be relived of the responsibility of captaincy. Leading Bengal is an honour and privilege, and I am always ready to take up the challenge,” he was quoted as saying by TOI on Friday.

During the last domestic season, Tiwary s average of 126.7 set the mark for the highest in a List A season (minimum 400 runs) and he also achieved two others firsts by a domestic batsman: an average of over 100 in the Vijay Hazare Trophy and Deodhar Trophy. Interestingly, he was told of one these achievements on Twitter by veteran statistician, Mohandas Menon this week.

Speaking to ESPNcricinfo, Tiwary had expressed his frustration at being overlooked for the India A squads to play four-day matches versus South Africa A, a quadrangular series featuring South Africa A, Australia A and two Indian teams as well as the Duleep Trophy.

I was hoping to be picked in the India A squads. When somebody performs to his highest, then he should be rewarded. And I had an outstanding 50-over tournament last season, creating a record that no one else has had in Indian cricket history, said Tiwary, who played the last of his 12 ODIs in July 2015. 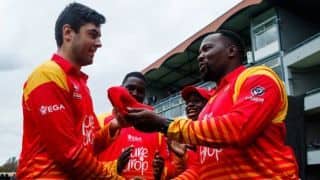