Stoinis smoked 11 sixes and 9 boundaries to remain unbeaten on 146 off 117 balls, but his partner at the end Josh Hazlewood was run out for a golden duck, which handed New Zealand a 6-run win.

All-round New Zealand survived a scare when Marcus Stoinis went on a six-hitting spree, reviving Australia from a perilous 54 for 5 to agonisingly close to a win in the first ODI, at the Eden Park in Auckland, on Monday. Chasing 287, Australia had suffered a batting collapse and were tottering at 67 for 6 at one stage. But Stoinis had other plans, as he tagged the Australian tail along with him to almost snatch away a victory from New Zealand. Stoinis smoked 11 sixes and 9 boundaries to remain unbeaten on 146 off 117, but his partner at the end Josh Hazlewood was run out for a golden duck, which handed New Zealand a win.

With this victory, New Zealand have taken a vital 1-0 lead in the three-match Chappell-Hadlee Trophy 2016-17, ending Australia s unbeaten run against them in recent times. The win takes New Zealand one step closer to clinching the series in their favour, as Australia sorely missed their batting pillars in David Warner and Steven Smith in a stiff run chase. After being set 287 to win, Australia had suffered a batting collapse and stuttered to 67 for 6 at one stage. FULL CRICKET SCORECARD: New Zealand vs Australia, 1st ODI at Auckland

It was a day that almost belonged completely to the New Zealand side, but one Australian did not deserve to be on the losing end. Stoinis, playing in his only second ODI, bowled 10 overs on the trot to take 3 crucial wickets, and held Australia s innings together with a gritty 146 that also happened to be the highest individual score in the match, on a batting-friendly wicket.

Stoinis came in at a time when his team was not only struggling, but with almost no batsmen left, Australia were staring at a defeat by a huge margin. But Stoinis played like a man possessed, and did not keep a foot wrong. From 78 needed off 48, he single-handedly brought the equation down to a run-a-ball 33. He kept refusing singles, albeit only in the final few overs, since his last partner Josh Hazlewood has nothing in his repertoire as a batsman.

Mitchell Starc had himself gone for a big shot, getting caught at deep mid-wicket after the 43rd over. Australia needed 61 off 42 at that stage.

In the 44th over, Stoinis began his barrage of sixes by hitting 2 of them straight down the ground off Trent Boult, who had earlier rocked Australia with a flurry of wickets.

In the 45th over from Tim Southee, the right-handed Stoinis hit 2 sixes and 1 four. The game might have ended in that over itself had Williamson not gone for a direct hit. Stoinis could have been dismissed, and New Zealand would have won comfortably.

But Stoinis had other plans. He could not manage more than 7 runs in the next over from Boult, also surviving an appeal for caught behind on the final delivery that New Zealand had reviewed.

With 19 needed off 24, Stoinis played 3 dot balls despite sending the ball close to the ropes a couple of times. On the fourth ball, he hit a six over cover off Southee. The next ball went flying over long-off into the stands; it was the 11th six of Stoinis innings.

Australia needed 7 off 18 when disaster struck. Stoinis had decided that Hazlewood will not be on strike, and he had to take a single. Williamson placed himself almost next to the pitch, at short mid-on. Stoinis hit straight to the Kiwi captain, but Hazlewood was way ahead backing up. Hazlewood did attempt to return, but a direct hit sealed the thriller in New Zealand s favour.

Interestingly, Hazlewood did not contribute any in the last-wicket stand of 54 runs.

Australia might have lost the game with their batsmen letting them down, but there were plenty of contributions from the lower order. Batting at No. 7, Stoinis scored 146 not out. James Faulkner scored 29 off 49 balls with just 1 boundary, but added 81 runs in 16 overs for the 7th wicket.

Pat Cummins sprang a surprise when he clobbered 5 boundaries and 1 six to score a rapid 36 off 28 balls. He added 48 runs with Stoinis in a little more than 6 overs. Australia were bowled out for 280 in 47 overs.

Earlier in the day, Australia suffered a big blow when Matthew Wade, their captain for this series, was ruled out of this clash. Finch was named captain, and he decided to field after winning the toss. Australia could never really contain the Kiwis, with their stand-in wicketkeeper Peter Handscomb making plenty of mistakes behind the wickets, along with two dropped catches. Shaun Marsh also dropped two catches, which at the end proved costly.

New Zealand were bolstered by Neil Broom s third half-century in his career. Broom scored a 75-ball 73, whereas a rollicking start was provided by Martin Guptill, who scored his 32nd ODI fifty.

Stoinis was the deserving winner of the Man-of-the-Match award, as he had earlier bowled 10 impressive overs on the trot to take 3 for 49. He had accounted for Guptill, Williamson and Colin Munro.

Man of the Match: Marcus Stoinis. 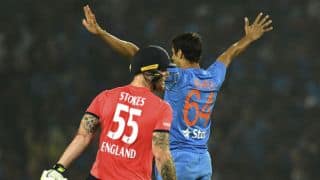 Ashish Nehra: Age is just a number; takes me one game to get into groove 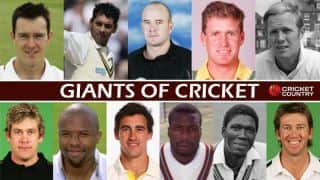