Mark Boucher roped in as mentor for Quinton de Kock

Mark Boucher roped in as mentor for Quinton de Kock 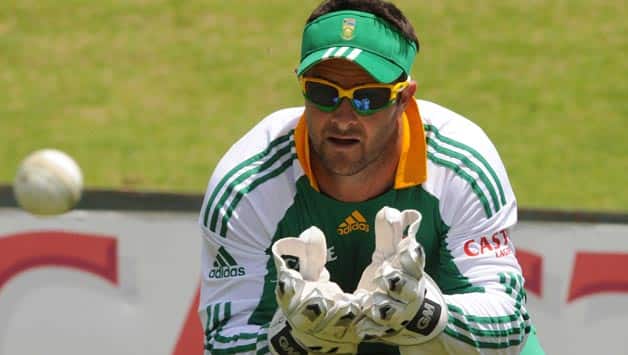 Boucher made an appearance at a Proteas training session in Cape Town on Thursday, after being recruited as a consultant by coach Kirsten.

Kirsten said the Proteas could not afford to turn away Boucher’s experience of 147 Tests and almost 300 ODIs.

Boucher’s first task is to mentor De Kock, especially on the emotional side.

“I think (Boucher) has a lot to offer and so we felt the perfect place would be for Quinton to spend some time with him, not only as to the skills required, but more importantly the pressure of international competition,” Kirsten was quoted as saying by ‘The New Age.’

De Kock is facing a disciplinary hearing after a spat in a provincial game last week when he allegedly shoved opponent Alistair Gray while batting.

“The plan is to play Quinton in all three one-day games against (visitors) New Zealand,” Kirsten said as he explained how he was not unduly concerned that De Kock’s pending disciplinary would impact on that.

Even if De Kock is found guilty, it could result in a suspension that would only affect his participation in the local series. Kirsten said the Proteas planned to have De Kock in all three matches against New Zealand in order to give AB de Villiers a chance to focus on his captaincy.

“Certainly, everyone is excited about (De Kock’s) ability – it is almost like when Boucher came through 17 years ago,” Kirsten said.

Pakistan women's World Cup matches to be held at Cuttack