Mark Richardson remembered the destruction and the panic the bomb caused in 2002.

Napier: Former opener Mark Richardson, part of the New Zealand squad which abandoned their tour of Pakistan after a bomb blast in 2002, said on Wednesday he felt sorry that the country has become a cricket no-go zone. Top 10 batsmen in ICC Cricket World Cup 2015

New Zealand flew back home at the start of the second and final Test in Karachi on May 8, 2002, after a blast close to their hotel killed 13 French naval staff.

“The over-riding memories are sad ones when the bomb went off in Karachi on the morning of the game,” Richardson, 43, told AFP.

“We had security concerns but we had started very comfortably. We had visited a fast food restaurant in Karachi and we were feeling very comfortable and then ‘kaboom’ and it was frightening and unfortunately we were on the plane back home later that day.

“We felt for our hosts, it wasn’t like a daily occurrence. They were as shocked and as freaked out as we were. You feel for Pakistan.”

Richardson remembered the destruction and the panic the bomb caused. “It was very dusty, the glass doors in my room caved in. Luckily I was in the bathroom and I had another wall protecting me so I didn’t get hurt by glass. There was damage to the hotel even though we were some way away from the blast. People lost their lives which was tragic.

“There was shrapnel flying over our hotel from 100-150 metres, the power of the blast was frightening. Our bus was due to go in about five minutes and had the blast been five minutes later, our bus would have gone straight through that zone. We were lucky with the timing.”

That was the beginning of the end for international cricket in Pakistan as security in the country deteriorated.

Tuesday marked the sixth anniversary of the militant attacks on the Sri Lankan team bus, which killed eight people and left seven Sri Lankan players injured. Those brazen attacks suspended all international cricket in Pakistan, forcing the national team to play their home games in the United Arab Emirates.

“I think it’s terrible for Pakistan, which is one of the major cricketing nations,” said Richardson, who felt the cricketing community alone cannot bringing international tours back to Pakistan.

“I think the sporting community has very little say in this. It’s not even the political environment, but it’s for the people who understand the environment, people with a lot more power who know diplomacy.

“You want to be able to tour Pakistan, it’s not about playing Pakistan in international cricket but it’s about going to someone’s home and taking them on in their own environment but you can’t do that.” 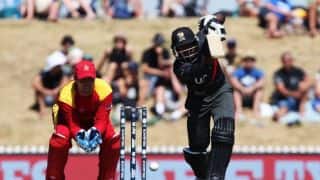 Krishna Karate dismissed for a duck against Pakistan in ICC Cricket World Cup 2015, Pool B match 22 at Napier