National selector Mark Waugh has suggested that all-rounder Mitchell Marsh could open the bowling for Australia when they tour India to allow more spin options.

Sydney: National selector Mark Waugh has suggested that all-rounder Mitchell Marsh could open the bowling for Australia when they tour India to allow more spin options. “You could play one quick and then play Mitchell Marsh as the opening bowler and slide someone (a spinner) in,” Waugh was quoted as saying by Cricket Australia’s website on Saturday. Former Australia skipper Ricky Ponting backed Waugh, asserting that Marsh may prove to be effective in Indian conditions. “You’d think the Australian team would only play two specialist fast bowlers (and) I think Mitchell Marsh’s bowling in India will be a lot more effective than (Hilton) Cartwright’s,” Ponting said.

“Maxwell and Agar can all bat well, they can all bowl well and I think at different times we’re going to need some batsmen in our side who can bowl quality spin,” he added. Ponting, who led Australia to a series win in India in 2004, warned that Virat Kohli’s side would be difficult to beat in the subcontinent.

“It’s actually got harder and harder in the last four or five years (to win in India) because I think they’ve started to produce more spinning wickets in India than even when we played,” Ponting said on the sidelines of the Big Bash T20 domestic tournament.

“They used to turn on days three, four and five. Now they’re turning from day one and that’s why touring teams are finding it harder and harder to win there. “The Indians thrive in those conditions (with Ravichandran) Ashwin and (Ravindra) Jadeja. Jadeja is not a great spinner, but on those pitches he’s near unplayable at times,” he stated. 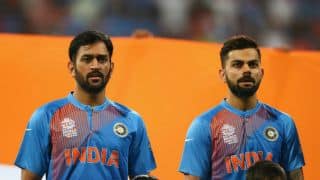