Darren Bravo (41) and Marlon Samuels (62) put on a hundred-run stand as West Indies reached Tea at 146 for 2 on day two in the second Test against Bangladesh at Khulna. 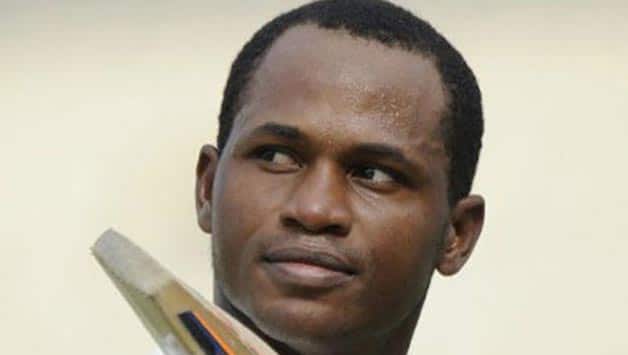 Marlon Samuels hit a defiant half-century to help the West Indies recover to 146-2 at tea on the second day of the second and final Test against Bangladesh in Khulna on Thursday.

An unfinished 103-run stand between Samuels (62) and Darren Bravo (41) rescued the visitors after the home side had them struggling on 43-2 in reply to Bangladesh’s first innings of 387.

Paceman Rubel Hossain gave Bangladesh an early breakthrough when he had Kieran Powell caught at square leg off a short delivery. Powell, who scored a century in each innings in the first Test, managed just 13.

Off-spinner Sohag Gazi removed Chris Gayle for 25, as the left-hander’s attempted sweep was well caught by wicket-keeper Mushfiqur Rahim down the leg side.

But Samuels has so far hit eight fours and a six in his 18th Test fifty, on a pitch which has yet to offer the bowlers any help.

Earlier, Bangladesh added 22 to their overnight score of 365-8.

Abul Hasan, who on Wednesday became only the second man in 135 years of Test cricket to score a debut hundred while batting at number ten, was last man out.

The 20-year-old left-hander hit 14 boundaries and three sixes during his 163-ball knock before being caught in the slips off a short Fidel Edwards’ delivery.

Mohammad Mahmudullah was dismissed in the third over of the day when he gave Darren Sammy a return catch after scoring a solid 76.

He had helped Hasan add 184 runs for the ninth wicket to lift the home team from a precarious 193-8 on the first day.

Their partnership fell just 11 short of the world record ninth-wicket partnership by South African pair Mark Boucher and Pat Symcox against Pakistan in Johannesburg in 1998.

Edwards was the pick of the bowlers with 6-90, his 12th five-wicket haul in Test matches. Sammy chipped in with 3-74.

The West Indies lead the two-Test series 1-0 after their 77-run win in the first Test in Dhaka.