Marnus Labuschagne on Thursday became the sixth Australia batsman to register a hundred in three consecutive Test innings. Labuschagne, batting against New Zealand in the first Test of the three-match series in Perth, struck an unbeaten 110 as Australia finished Day 1 on 248 for 8. Labuschagne hit 14 boundaries and his only six was also the stroke that brought up his hundred.

“It feels good. I’m just taking it one at a time. We’re in a good position now, but still a lot more work needs to be done. The boys were teasing me through the week, so to get one away like that, I’m really stoked,” Labuschagne said at the end of the day’s play.

Jack Fingleton has the most consecutive Test centuries for Australia with four hundreds on the trot – three against South Africa and one versus England in 1963. Warren Bardlsey, Charles Macartney, Arthur Morris and Don Bradman have struck three consecutive Test tons each.

Before this, Labuschagne had last month notched up back-to-back centuries against Pakistan. During the first Test in Brisbane, Labuschagne scored his maiden Test century and pummelled Pakistan with a knock of 185 as the home team registered a thumping win by an innings and five runs. Labuschagne followed it up with a second ton in Adelaide, his 162 leading Australia to a massive 589/3 declared, in reply to which Pakistan could only muster 302 and 239.

Having made 347 runs at an average of 173.5 against Pakistan in two Tests, with his first two centuries in Test cricket, Labuschagne looked more assured. And on Thursday, Labuschagne continued his splendid run in Tests, with another fine innings. After Joe Burns was dismissed cheaply by Colin de Grandhomme, Labuschagne and former Australia captain Steve Smith added 132 runs for the third wicket.

New Zealand hit back with the wickets of Smith and later Matthew Wade cleaned up by Time Southee but Labuschagne and Travis head took Australia safely to stumps. During his knock, Labuschagne became the joint fourth-fastest Australian player to reach 1000 Test runs. Bradman is right at the top, followed by Neil Harvey and Sid Barnes. Labuschagne is levelled with Herbie Collins, Doug Walters and Adam Voges. 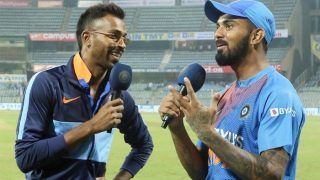 “Dressing Room Feels Empty Without You,” KL Rahul’s Message For Hardik Pandya is All The Bromance You Need