Debutant Shaun Marsh and Michael Hussey hit unbeaten half-centuries to put Australia on top in the second cricket Test against Sri Lanka in Pallekele on Friday. 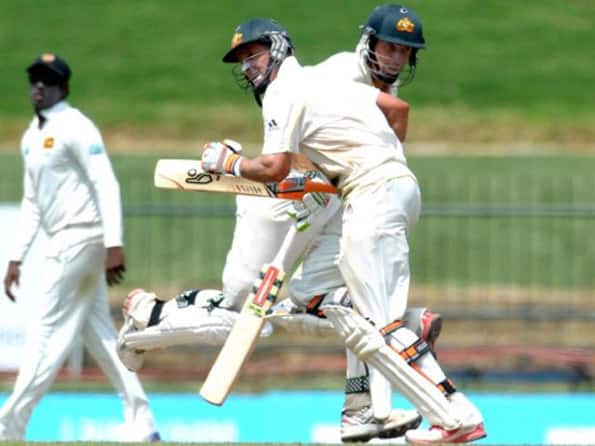 Debutant Shaun Marsh and Michael Hussey hit unbeaten half-centuries to put Australia on top in the second cricket Test against Sri Lanka in Pallekele on Friday.

The left-handed pair put on 148 for the fourth wicket as the tourists moved to a commanding 264 for three in their first innings by tea on the second day, a lead of 90 runs with seven wickets in hand.

Marsh was on 87 when the umpires decided to call the day off due to bad weather, accompanied by Hussey on 76.

The pair came together after Sri Lanka had grabbed three quick wickets in the morning session to restrict Australia to 116-3 in reply to their own 174.

Former Australian opener Geoff Marsh looked on from the stands as his son plodded for two hours to reach 26 before opening out after lunch with fluent strokeplay.

Marsh drove Suranga Lakmal through the covers and then chipped debutant leg-spinner Seekkuge Prasanna over mid-on to take Australia past Sri Lanka’s total.

Two successive boundaries off Prasanna, a lofted shot and a straight drive, gave Marsh his half-century from 133 deliveries.

The knock will help the new cap cement his place in the side even when Ricky Ponting returns from home for the third and final Test in Colombo following the birth of his second child.

Hussey reached his second half-century of the series by smashing off-spinner Suraj Randiv to the square-leg fence for his sixth boundary.

Sangakkara, who had gone wicketless in 98 previous Tests and has just one first-class wicket to his credit, also bowled the first over with the second new ball.

Australia lost Shane Watson before they had added to their overnight score of 60 for no loss, and the other opener Phil Hughes fell shortly after the drinks break.

Watson had made 36 when he left alone a delivery from seamer Lakmal that dipped in to uproot his off-stump.

Left-hander Hughes carried his overnight score of 23 to 36 before he was snapped up at forward short-leg by Tharanga Paranavitana off Randiv.

It soon became 116-3 as skipper Michael Clarke (13) attempted to drive seamer Chanaka Welegedara outside the off-stump and edged a low catch to Mahela Jayawardene at second slip.

Australia lead 1-0 in the three-match series, having won the first Test by 125 runs last week. (AFP)

Lalit Modi lashes out at N Srinivasan, asks him to resign