New Zealand cruised to a five-wicket victory against England in the first ODI at Lord’s on Friday thanks to Martin Guptill’s unbeaten 103. 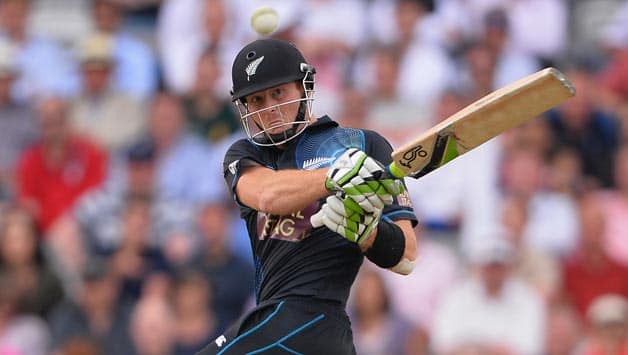 New Zealand cruised to a five-wicket victory against England in the first ODI at Lord’s on Friday thanks to Martin Guptill’s unbeaten 103.

New Zealand chased down a 228-run target set in 46.5 overs. Guptill pulled a delivery through square-leg when the scores were tied to take the visitors’ score to 231 for five.

The New Zealand innings, though, did not start on a positive note as England seamer James Anderson dismissed Luke Ronchi and Kane Williamson for ducks.

But Guptill stitched together a 120-run partnership with Ross Taylor (54) for the third wicket. Taylor also was sent packing by Anderson.

Grant Elliott (27) then added an important 47-run stand with Guptill. Off-spinner Graeme Swann and Jade Dernbach took a wicket each to restrict the visitors at 185 for five, but it wasn’t to be enough.

James Franklin (16 not out) came in and calmed things down as the Kiwis won in the end to take a 1-0 lead in the three-match series.

Guptill was adjudged as the Man-of-the-Match.

Earlier, the Kiwi captain Brendon McCullum won the toss and elected to field.

Captain Alastair Cook (30) and Ian Bell (18) gave England a solid start as they put on 45 for the opening partnership.

But pacer Tim Southee struck twice as he removed both the openers in quick succession to leave the hosts at 50 for two. Wicketkeeper Ronchi, who played for Australia before deciding to play for New Zealand, caught both the catches.

Then a 67-run partnership for the third wicket was stitched by Jonathan Trott (37) and Joe Root (30). Off-spinner Nathan McCullum, though, dismissed the pair as England were at 124 for four.

Then the wickets of Eoin Morgan (6) and Jos Buttler (14) left England reeling at 159 for six. Chris Woakes (36) tried to hold the lower order together but Kyle Mills had him returning to the dressing room.

Tim Bresnan (25) and Graeme Swann (15) added 34 runs for the eighth wicket. Southee then returned to scalp Bresnan’s wicket in the penultimate over.

Swann was later dismissed by left-arm pacer Mitchell McClenaghan in the last over as England only managed 227 for nine in their 50 overs.

IPL 2013 spot-fixing: 5 BCCI vice-presidents likely to resign, according to reports