Zimbabwe marked their return from a six-year exile by racking up an impressive 264 for two against Bangladesh on the first day of a one-off Test at the Harare Sports Club on Thursday. 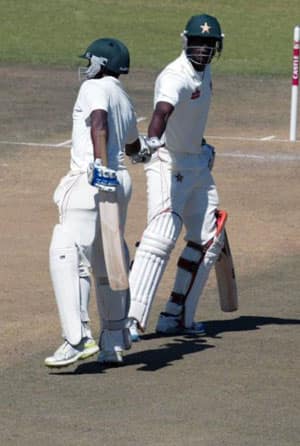 Zimbabwe marked their return from a six-year exile by racking up an impressive 264 for two against Bangladesh on the first day of a one-off Test at the Harare Sports Club on Thursday.

All four of Zimbabwe’s top batsmen made runs with Hamilton Masakadza finishing the day unbeaten on 88 with seven fours and a six as he closes in on a second Test century.

Masakadza made his first century 10 years ago on his debut at the age of 17, scoring 119 against West Indies on this same ground.

New skipper Brendan Taylor was also undefeated on Thursday, having made a steady 40 off 108 balls.

Debutant opener Tinotenda Mawoyo made 43 while Vusi Sibanda smashed 78, with seven fours and one six, as the two put on 102 for the first wicket.

“I cannot compliment our guys enough, said Taylor. “The way the openers stuck it out and the platform of Hamilton and myself in the final session was perfect – you cannot ask more than that. Tomorrow we must stay focussed.”

After losing the toss, and being put into bat on a greenish wicket by Bangladesh captain Shakib al Hassan, Zimbabwe constructed a foundation for what could be a winning score.

Zimbabwe’s batsmen mixed caution with aggression, allowing few chances especially after a scare in the second over of the day when Sibanda was very nearly run out.

Bangladesh, already defeated by a Zimbabwe Xl in a three-day tour match at the weekend, looked shell-shocked by the day’s end.

Only 21-year-old medium-pacer Rubel Hossain got wickets and finished with two for 58 off 18 overs.

Mawoyo was the first to fall, caught by Mahmudullah at deep backward point with Sibanda the second to go, midway through the afternoon session, when he edged a short ball to wicketkeeper Mushfiqur Rahim.

Despite the return of Test cricket, the match only attracted fewer than 1,000 people.

But the performance of the Zimbabwe had International Cricket Council chief executive Haroon Lorgat feeling optimistic over the team’s future in the five-day game.

“To have Zimbabwe return to playing competitive Test cricket is a progressive step and I hope we will see good performances,” said Lorgat.

“The future of Test cricket must be supported and I am encouraged by the positive signs of recovery we see in the game in Zimbabwe. It is incumbent on the entire cricket community to work together to promote Test cricket and that is why I wish to support this Test match.

“Much has been done to improve cricket in Zimbabwe, especially in the past two years. It has been fantastic to see some experienced and talented individuals becoming deeply involved, including former players such as Heath Streak, Grant Flower and Alistair Campbell along with Zimbabwe Cricket’s chairman Peter Chingoka and chief executive Ozias Bvute.”