Contesting a seat in the national parliament for the ruling Awami League party in the December 30 elections, Mashrafe says he just wants to do more for sports and charity.

He may be Bangladesh‘s biggest cricket star, but Mashrafe Mortaza insists he is not another Imran Khan, Pakistan‘s cricketing superhero-turned-prime minister.

Contesting a seat in the national parliament for the ruling Awami League party in the December 30 elections, Mashrafe says he just wants to do more for sports and charity.

ALSO READ: I always had the impulse for politics: Mashrafe Mortaza on contesting in parliamentary election

“To be honest, the level where Imran Khan has reached, people cannot always reach there even if they want to,” Mashrafe told AFP in an interview.

“My desire is to do something for sports… since I am a sportsman, my wish is limited here. I will work for my region to see if I can do something good.”

Mashrafe hails from the southwestern district of Narail where his charity Narail Express — also the fast-bowler’s nickname — has donated ambulances to hospitals and high-yield rice seeds to farmers.

Turning to politics is nothing new for cricketers in South Asia, where the sport is massively popular.

But unusually, Mashrafe is still playing, captains Bangladesh in the one-day format of the game, and intends to lead the team at next year’s World Cup.

Mashrafe has already retired from Twenty20 international cricket and has not played a Test match since 2009.

He may also have been upstaged in the hearts of the nation’s cricket fans by his teammate Shakib Al Hasan, one of the world’s leading all-rounders.

But Mashrafe’s die-hard attitude off the pitch — he has had seven operations on his knee — and on-field expressions of patriotism could well endear him to voters.

He also won plaudits as captain, guiding the cricket minnows to their first World Cup quarter-final in 2015.

Still, when Mashrafe announced his decision to enter politics, many fans were openly critical.

Most of the comments on his social media fan pages are against him joining Bangladesh’s “nasty” and “gutter-like” political arena.

Others criticised him for joining the party of Prime Minister Sheikh Hasina, who has been accused of jailing opponents and stifling dissent.

But Mashrafe insists that he will not be dragged down.

“Even though I’m supporting my party wholeheartedly, I have 100 percent respect for them and will continue to have it.

“I’m saying this because every person has the right to support who they want to support. I can only respect the opposition from my heart, which I really do.”

He also set the bar high for politicians.

“Politicians should be qualified and good human beings. I’m not saying I’m already one of them though. The young people are closely seeing our social decadence. I think they should also step into politics,” he said. 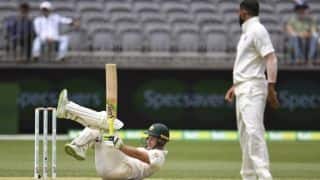