Shakib Al Hasan will lead the side if Mashrafe Mortaza is unavailable.

Bangladesh captain Mashrafe Mortaza is likely to miss the three-match ODI series in West Indies owing to his wife’s illness. The ODI series is scheduled to start from July 22, and ODI specialists are supposed to leave for West Indies on Friday. The team management will take a final call before that on his availability and name a replacement accordingly.

“Mashrafe’s involvement in the ODI series is in doubt,” chief selector Minhajul Abedin told ESPNCricinfo. “I spoke to him last night. His wife is really sick. I don’t think he will be able to go to the West Indies.” If his wife recovers by the start of the series he may fly to West Indies. If he is unable to make it then Shakib Al Hasan will lead the side.”

Meanwhile, Shafiul Islam sustained an ankle injury during Tuesday’s training session which might see him ruled out of the second Test starting July 12. 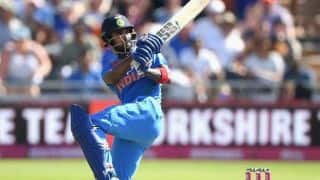