A turnout of more than 60,000 is expected to throng the ANZ stadium, venue for Wednesday's Twenty20 international between India and Australia. 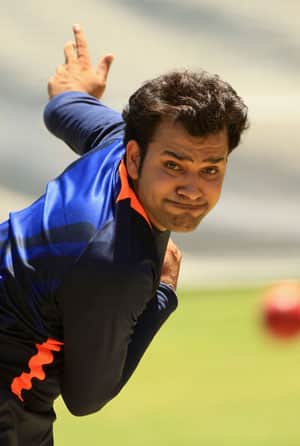 A turnout of more than 60,000 is expected to throng the ANZ stadium, venue for Wednesday’s Twenty20 international between India and Australia.

A spokesman at New South Wales confirmed that 60,378 tickets had already been sold for the match at ANZ, which is vying to be one of the venues in the 2015 World Cup.

And a big turnout tomorrow, in excess of 60,000, will be viewed favourably by World Cup organisers it is believed.

It is the first time that the 83,500-capacity stadium will be hosting an international cricket match, although domestic games have been played here since 2003.

“Everyone is interested in how it’s going to go in western Sydney because that’s not a traditional international venue,” Cricket Australia spokesman Peter Young was quoted as saying in Sydney Morning Herald.

“It again demonstrates the massive drawing power of this format. It will be interesting to see whether it’s the same demographic, the same people who have been excited by the Thunder and the Sixers (in the Big Bash League), or whether it’s not. (Our) suspicion is it will be the same type of audience.”

The last time a cricket match in the city saw a turnout of close to 60,000 was during the first summer of Don Bradman’s Test career in December 1928 when 58,466 packed the Sydney Cricket Ground to watch Australia take on England. (PTI)