David Warner and Bipul Sharma were involved in a sensational unbeaten 46-run alliance as Sunrisers Hyderabad beat Gujarat Lions by 4 wickets to reach the final of Indian Premier League 2016.

David Warner scored a sensational 93 not out even as the rest of the Sunrisers Hyderabad (SRH) batting floundered, but it was good enough to beat Gujarat Lions (GL) by 4 wickets to reach the final of Indian Premier League (IPL) 2016. Bipul Sharma was the unlikely hero for SRH along with Warner, slamming an undefeated 27 off only 11 balls, hitting 3 sixes. Brendon McCullum’s brilliance saw Shikhar Dhawan run out for a duck, and SRH continued to lose regular wickets after that. Moises Henriques looked promising in a 6-ball 11 but ended up hitting a rank long hop from Dwayne Smith straight to Eklavya Dwivedi at cover. SRH were 33 for 2 in the fifth over. FULL CRICKET SCORECARD: Gujarat Lions vs Sunrisers Hyderabad, IPL 2016, Qualifier 2 at Delhi

Yuvraj Singh came in at No. 4 but unlike in the last few games he was not able to make a good contribution. Yuvraj scratched around for 13 balls before trying to go inside out against Shivil Kaushik and holing out to Smith. Yuvraj hat smashed his first ball to the boundary but was tied down by the combined spin of Kaushik and Suresh Raina after that. FULL CRICKET UPDATES: Gujarat Lions vs Sunrisers Hyderabad, IPL 2016, Qualifier 2 at Delhi

With SRH now slipping to 61 for 3 SRH needed someone to give Warner company. Deepak Hooda ended up getting out LBW by Dwayne Bravo for 4, and Ben Cutting edged Kaushik behind to wicketkeeper Dinesh Karthik. At 84 for 5 it looked more and more difficult for SRH. Naman Ojha walked in after that and put on a crucial 33 with Warner. Ojha hit 10 off 8 balls with 1 six but holed out to Ravindra Jadeja off Bravo going for another six.

With 46 to win off 25 balls with 4 wicketes in hand, Bipul Sharma walked in. He slammed Praveen Kumar straight over long off for six in the next over as SRH got 11. Dhawal Kulkarni then bowled an excellent over which saw just 2 runs coming off the first 4 balls. Bipul again managed to hit a six, this time a ramp over fine leg off a yorker. He got 2 more off the final delivery to get 10 off the over. Now 24 were needed off the last 2 overs. Warner hit Bravo for a boundary off the first ball and then again off the fourth delivery. Bipul hammered the final ball over long on for another six, which brought the runs required off the final over down to just 5. Warner then hit the first ball of the over for a boundary and followed it with a single to remain unbeaten on 93, as SRH stormed into the final of IPL 2016.

Earlier, Aaron Finch scored a vital 50 and Dwayne Bravo played a late cameo to lead GL to a competitive 162 for 7. GL tried to counter their failure in the middle order by shifting two of their openers down the order. Eklavya Dwivedi was promoted to open batting, with Aaron Finch and Dwayne Smith batting at Nos 5 and 6 respectively. Having Dwivedi open and Smith bat so low backfired, but Finch helped GL stay afloat after being reduced to 83 for 5.

SRH suffered a huge blow before the match with their star bowler Mustafizur Rahman picking up an injury that kept him out of the game. His replacement was Trent Boult, who has not played competitive cricket since the second Test against Australia in February. Boult struck early when he had Suresh Raina out LBW for 1, but his rustiness showed after that. Bhuvneshwar Kumar, meanwhile, continued his excellent run in the tournament when he had Dwivedi slash to Boult at third man.

Brendon McCullum was soon joined by Dinesh Karthik and the duo scored at a brisk rate to put on 44. Karthik was the aggressor, scoring 26 off 19 balls with 4 fours and 1 six. The partnership came to an end after a mix-up between both batsmen that resulted in Karthik getting run out. McCullum joined soon after, holing out to Bhuvneshwar off the bowling of Bipul Sharma. McCullum’s 32 came in 29 balls and included 5 fours. Smith did not last long either, and slashed Ben Cutting to Shikhar Dhawan at cover.

Finch then came in and hammered 50 off 32 balls with 7 fours and 2 sixes. He was bowled by Cutting but not before putting on 51 with Ravindra Jadeja. Bravo then smashed a 10-ball 20 with 4 fours before getting bowled by Bhuvneshwar. Jadeja and Dhawal Kulkarni then took GL to a competitive score of 162 for 7. 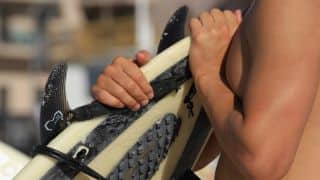