Western Australia have won the Matador Cup after defeating New South Wales in  the final by 64 runs.

OUT J Hazlewood  0  b Behrendorff

OUT P Cummins 4 b Rimmington

OUT RGL Carters  1 b Rmmington

Bad blow there, losing Watson on 83. The equation is in favour of WA now.

NSW have lost Patterson but Watson is batting well on 78.

OUT KR Patterson 44 b Behrendorff

Watson is past his fifty, he’s taking chances now as NSW have accelerated.

Watson took a few risks in these five overs while Patterson too accelerated.

WA bowlers making it very difficult for Watson and Patterson to score.

Terrible start for NSW. Watson and Patterson have to steer the side out of trouble.

OUT N Maddinson  4  b Behenderoff

OUT S Whiteman 0 b Bollinger

WA lost Voges and Agar in the pursuit of quick runs but Klinger still remains on 80. He has to stay till the end.

OUT A Agar 5 c Watson b Bollinger

The New South Wales bowlers have kept things tight despite conceding two boundaries in the 38th over. Both Klinger and Voges would like to get a move on with only 10 overs left.

The scoring rate has picked up slightly. Klinger has past his fifty. Both Voges and Klinger have kept the scoreboard ticking with singles.

The scoring has been slow after Simmons got out. New man Adam Voges seems to be taking some time to settle down.

Simmons and Klinger appear to be consolidating. If WA have wickets in hand in the end they can mount an assault late in their innings.

Simmons and Klinger have steadied the innings and will look to go for some big shots and push the scoring rate up. Simmons overcame a cautious start while Klinger has been free-flowing from the start.

Western Australia 70/1 I Overs 13
C Simmons 23(32), M Klinger 12(22)
Simmons’ innings has gained momentum with a boundary each in the last three overs.
Western Australia 43/1 I Overs 8
C Simmons 7(24), M Klinger 1(4)
Big wicket for Wales. Harris was the one who had scored most of the runs due to a slow start from Simmons. Gurinder Sandhu gets the breakthrough as Harris walks back.
OUT! M Harris c Watson b Sandhu 33(22)
Western Australia 42/0 I Overs 7
C Simmons 7(21), M Harris 33(21)
Openers Simmons and Harris look settled now. Simmons had piled on the pressure on himself as he was stucl on six from 18 balls. But one over brought the momentum back in favour of the batting side. Harris hits three fours and follows it up with a six in the next over.
Western Australia 13/0 I Overs 1
C Simmons 4(3), M Harris 7(3)
Solid start for the Warriors. Bollinger starts off with consecutive wides before Harris hits a boundary and adds three more in the next delivery. Craig Simmons also opened his account with tree.

WA have won the toss & we will bat #MatadorCup pic.twitter.com/CvGFSh0mr2

Both teams have some key players. Shane Watson will be the start player for the Wales. He is making a comeback from injury. The Wales also have a good pace attack in Doug Bollingers, Josh Hazlewood and Pat Cummins. 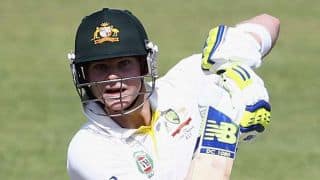