Rangpur Riders suffer their first loss of this edition of the BPL, with this loss.

Dhaka Dynamites romp home to a comfortable 78-run win in Match 9 of the Bangladesh Premier League (BPL) 2016 at Sher-e-Bangla Stadium at Dhaka. With this win, the Dynamites have won two out of their three matches, while this is Rangpur Riders first ever loss in this edition of the tournament. All the bowlers did an exceptional job for the Dynamites and ensured that they remained well on top throughout the game. Rangpur Riders kept losing wickets at regular intervals and found themselves in deep trouble through their innings. Rangers have won their previous two games by 10 wickets and this is the first time that their middle-order was really tested and they failed. Live Cricket Updates, Rangpur Riders vs Dhaka Dynamites, BPL 2016, Match 9 at Dhaka

Soumya Sarkar was the first to go as he was bowled by Nasir Hossain. Mohammad Mithun and Mohammad Shahzad too were dismissed in quick succession and Riders lost three wickets inside their powerplay overs, going at around five an over. Things went from bad to worse as Riders were reduced to 80 for 7 in the 16th over and the chances of winning from there looked really bleak. With over 20 an over required from that stage, the fate of the bat looked more or less sealed. Dynamites went through the formality and ensured that they won the match comfortably.

Earlier, Dhaka Dynamites have ended their innings with 147 for 6 on the board. The Dynamites started off well, as Sohag Gazi was smashed for a four and a six off back-to-back deliveries in the first over itself. He immediately struck the ball after that, getting rid of Mehedi Maruf for 10. Kumar Sangakkara then joined Nasir Hossain at the crease and the duo put on 69 for the second wicket and Dhaka Dynamites seemed to be in cruise control at that stage. But then Shahid Afridi was introduced into the attack and made an immediate impact.

He first removed the well set Nasir Hossain for 38 and then sent the experienced Ravi Bopara for a duck, trapping him in front. Sangakkara was dismissed in the very next over off Gazi for 23 and from 79 for 1, Dynamites were reduced to 81 for 4 in the next seven deliveries. Dynamites had two new batsmen in the form of Shakib-al-Hasan and Mosaddek Hossain at the crease. They needed to rebuild the innings and that is what they did. They added 39 off 27 deliveries for the fifth wicket and added some stability to the innings after losing a couple of wickets quickly. Shakib was dismissed immediately after the strategic time-out, but Mosaddek carried on in his own merry fashion, playing the big shots.

Earlier, Rangpur Riders won the toss and elected to bowl first, like they did in their previous two matches. 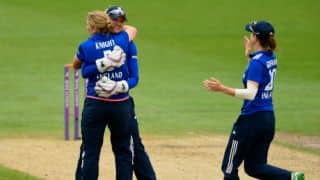