Irish boyband Boyzone indirectly caused a rain-lashed four-day English county championship cricket match to be abandoned without a ball being bowled on Friday.

Irish boyband Boyzone indirectly caused a rain-lashed four-day English county championship cricket match to be abandoned without a ball being bowled on Friday. The game between Derbyshire and Kent at Chesterfield was called off when umpires Stephen Gale and Billy Taylor decided there could be no play after heavy rain on Thursday only added to the already saturated outfield at the Queen’s Park venue.

The match had been switched to Chesterfield because there were concerns a Boyzone pop concert at the County Ground, the full-time home arena of Derbyshire in Derby, on Saturday could have damaged the outfield.

When we turned up on day one, I think we all knew we weren t going to bowl a ball on here for the four days and probably not for another four days because it’s just not in a fit state to play cricket, said Kent head coach Matt Walker.

You don t expect it these days with the facilities at grounds and everything in place to stop this from happening but when you come to an outground there is a risk and certainly in September there is an even higher risk. It s not the groundsmen’s fault, they were fighting a losing battle from ball one really. 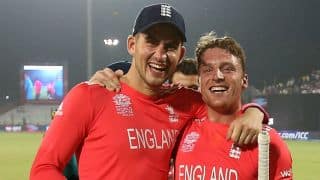