Talking about the World Cup, the 27-year-old conceded that is the goal for everybody, but his focus solely remains on the Bangladesh series.

After being dropped for the first three ODIs against India, New Zealand pacer Matt Henry made a strong comeback with 4/35 in the fifth ODI and seems to have staked a strong claim claim for a spot in New Zealand s World Cup squad with 2/48 in New Zealand s eight-wicket win over Bangladesh in the 1st ODI on Wednesday.

Henry who made his debut in 2014 at Wellington against India with 4/38, has only managed to play 42 ODIs in four years, but could travel to England this May as part of NZ s pace attack comprising Trent Boult and Lockie Ferguson.

“I’ve felt good all summer, to be honest. It’s just been good to get a bit of an opportunity and the ball is coming out nice,” Henry told stuff.co.nz after the 1st ODI against Bangladesh. “It’s always nice when the bowling group comes together and we put performances together.”

Talking about the World Cup, the 27-year-old conceded that is the goal for everybody, but his focus solely remains on the Bangladesh series.

“I think it’s a goal for everyone. It’s a pretty special thing to play in a World Cup. Every time you’re putting on a black jersey you’re just going out there to do your best for the team and doing what you can to achieve what you can to get a result.”

Henry played in the 2015 World Cup as a late replacement for Adam Milne in the semi-final and the final against Australia. 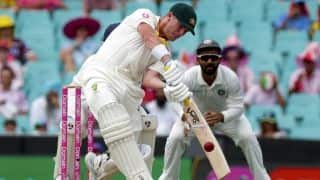