Matt Prior becomes third wicketkeeper to amass 4,000 runs in Tests for England

Matt Prior becomes third wicketkeeper to amass 4,000 runs in Tests for England

Knott was the first one to reach the landmark for England.

Stewart made 4,540 runs as a wicketkeeper. Knott on the other hand, made 4,389 runs during his illustrious Test career. Prior made his Test debut against the West Indies at Lord’s 2007. He straightaway made a mark with a century. Since then, he has had his fair share of ups and downs.

In the recently concluded Ashes 2013-14, Prior looked out of sorts. However, in the ongoing Test match against Sri Lanka, he played a crucial knock of 86, before getting out to around the wicket tactic from seamer, Shaminda Eranga. Eranga dug it short and Prior could only spoon a catch to the short-leg fielder, Kaushal Silva. 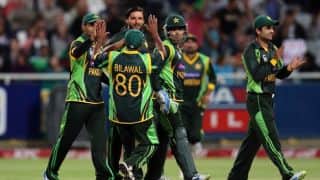