Robinson is anticipating for an information on Prior's recovery status during the period around Christmas.

Mark Robinson, manager of Sussex cricket club says that England‘s wicketkeeper/batsman, Matt Prior is in resolute to return to the National side after he has fully recovered from the injury. The 32-year-old had lost his central contract for 2014-15 after undergoing an Achilles surgery in September.

“Matt is a driven, hard man who has got a lot of medals and a lot of scars as well. The danger is when you look too far ahead but a bloke on a mission and with a dream is quite dangerous.” Robinson told BBC Sussex.

Prior, who made his debut for England against the West Indies in 2007 is one of the few batsmen to have hit an unbeaten century on the debut. He also has won 79 Test caps. He played uninterrupted 60 Tests for England within the period of March 2009 and December last year, following which he was replaced by Jonny Bairstow for the third Ashes Test against Australia.

Prior was back in the squad for the Test series against Sri Lanka in June but was forced to walk-off from the international responsibility after suffering an injury during the second Test against India, earlier this year. On the contrary, his replacement, Jos Buttler was offered a central contract by the England & Wales Cricket Board (ECB) while Prior was neglected.

“Jos Buttler is the man in possession at the moment and he’s done a good job of it so far. Historically players go in and have to come out at some point – be it from fatigue, injury or a dip in their form.” said Robinson.

“There are very few who stay in all the time. From Matt’s point of view, he needs to be there and wants to be there if Jos does have to come out. At this stage all Matt can do is get himself fit, get back playing cricket again and start putting in some performances. You don’t write people like Matt Prior off.” he added.

Robinson is anticipating for an information on Prior’s recovery status during the period around Christmas. He said that the panorama of considering the former Brighton College apprentice play recurrently for Sussex is “hugely exciting for anyone connected to the club” as he has just an year left on his contract for Hove.

“We’ve got to fit him on to the wage bill, which isn’t easy and is giving the chief executive and the chairman some sleepless nights. It has been softened by Chris Jordan getting a central contract, but it is still an outlay. The playing budget here has stayed static for five years and times are hard. You have to constantly beg, steal and borrow to make things better while trying to hang on to your best players. he said.

“From Matt’s point of view, he wants performances which will put his hat back in the ring for when Jos Buttler needs a break or which help win games for us. He will add to the dressing room, as well as the quality he brings on the pitch.” he concluded. India vs West Indies 2014: India have chance to become sole No 1 team in ODIs 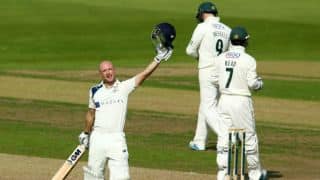