Matt Prior last played an international match in 2014.

England wicket keeper Matt Prior has retired from all forms of cricket. Prior made his Test debut against West Indies at Lord’s against whom he scored a century.  He was a regular in the England team behind the wickets and is considered one of England’s most successful wicketkeepers. VIDEO: Matt Prior announces his retirement from international cricket

“Today is a very sad day for me .. I feel privileged to have been involved in an era of such success,” Prior tweeted. Prior was having a long sytanding injury, which eventually might have led to his retirement. He last played an international match for England against India in 2014.

Today is a sad day for me as I announce my retirement. I must thank all of you for all the support over the years. http://t.co/Pxb5UPTJgE

Prior claimed 256 dismissals, putting him second behind only Alan Knott (269) among England wicketkeepers and ninth on the all-time worldwide list. Prior has scored 4,099 runs in 79 Tests with seven centuries. He also scored 1282 runs in 68 One-Day internationals (ODI) at an average of 24.18.  He had hoped to return to action with Sussex in this season’s County Championship, but having failed to recover full fitness, he has decided to walk away.

MS Dhoni only Indian in Forbes list of richest athletes 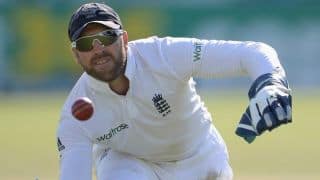