Glenn Maxwell's composed unbeaten 82 in the third test against India proved the explosive all-rounder has what it takes to succeed in the long format, Matt Renshaw said.

Ranchi: Limited-overs specialist Glenn Maxwell‘s composed unbeaten 82 in the third test against India proved the explosive all-rounder has what it takes to succeed in the long format, Australia team mate Matt Renshaw said on Thursday. It took a shoulder injury to Mitchell Marsh to enable Maxwell to return for his first test in more than two years and the flamboyant all-rounder, nicknamed “The Big Show”, responded with a mature career-best test knock, putting on a series-high 159 runs with skipper Steve Smith for the fifth wicket. Asked about the 28-year-old’s new-found maturity, Renshaw said, “I’ve never personally played with him so I’m not sure if it’s normal or something different. I think he’s pretty calm and relaxed and showed he could play well, and he did well today.” Full cricket scorecard: India vs Australia, 3rd Test at Ranchi

“I guess you’d have to ask Glenn what the difference is. But he’s a class player and he showed that he could do it in test cricket today. Hopefully, he can continue that tomorrow.” Such was Maxwell’s self-restraint that the right-hander took 57 balls to score his first boundary. Glimpses of his natural aggression manifested when he clobbered Ravindra Jadeja for two sixes the first bringing up his maiden test fifty but only once did he employ the risky reverse sweep and largely steered clear of extravagance. Full cricket updates: India vs Australia, 3rd Test at Ranchi, Day 1

Asked whether he was surprised by the Victorian’s largely risk-free batting, Renshaw said, “You hear about this in the media a lot, that he is a bit of a cowboy sort of thing. I think he just played some good cricket shots today.” Skipper Smith was also impressed by Maxwell’s effortless batting in his test comeback. “He played beautifully, stuck to his game plan the whole time, played nice and straight and hit the loose ball,” Smith told Star Sports channel. “He batted like he has been in the nets … He’s been hitting the ball really well so he got an opportunity and he’s making the most of it.” 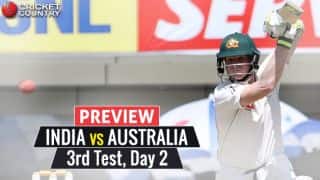