Matt Renshaw holds fort after David Warner's dismissal to take Australia to 224-2 at tea in 3rd Test, Day 1 against Pakistan

David Warner was eventually dismissed for a 95-ball 113 by Wahab Riaz.

Pakistan have picked up a couple of wickets, but Australia have the edge as they go into tea at 224 for 2 on Day One of the third Test at Sydney. Warner, who earlier became the fifth player to score a ton in the first session of the first day s play was eventually dismissed for 113 off just 95 deliveries. Wahav Riaz struck again, removing Usman Khawaja for 13 in a similar fashion. Khawaja was looking for an expansive cover drive. Sadly for him, the ball took the inside edge on its way to the wicketkeeper. With Warner s dismissal, Sarfraz became only the sixth Pakistani wicketkeeper to complete 100 Test dismissals.

Matt Renshaw has played well and looks set to get his maiden century. He has already registered his highest Test score and will not want to let this golden opportunity go by. Steven Smith, who came in at No. 4 after Khawaja s dismissal is unbeaten on 12. Wahab has easily been Pakistan s best bowler. Pakistan s only specialist spinner in the match Yasir Shah has struggled to get into any sort of rhythm. Misbah-ul-Haq as a result had to bring on his part-timers like Azhar Ali and Asad Shafiq into the attack as well. Australia are going at an excellent rate and if they keep it up, they can put up a daunting total on the board.

Earlier, Australia had won the toss and elected to bat first. Australia have made a couple of changes to their XI. They have roped in left-arm orthodox Steve O Keefe and handed out a debut to Hilton Cartwright in place of Jackson Bird and Nic Maddinson respectively. Pakistan too have a debutant in their side. Sharjeel Khan comes in place of Sami Aslam and Imran Khan makes the cut in place of Sohail Khan. Australia have an unassailable 2-0 lead going into this match. They won the first Test at Brisbane by 39 runs and followed it up with an innings and 18-run win in the next game at Melbourne. 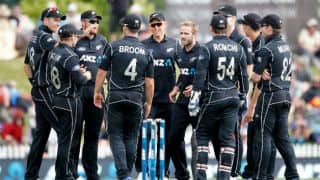