Skipper Steven Smith won toss and elected to bat against West Indies in Tri-Nation Series 2016 Final at Barbados on Sunday.

Australia wicketkeeper-batsman Matthew Wade’s stellar fifty leads his side to post mammoth target of 270 for 9 against West Indies in Tri-Nation Series 2016 Final at Barbados on Sunday. West Indies bowlers restricted Australia time to time, but were unable to stop the heroics of Wade in the death overs. Apart from Wade, Australia’s skipper Steven Smith and Aaron Finch also added 46 and 47 runs respectively on board. Their all-rounder Mitchell Marsh completed 1,000 ODI runs in the process to keep the scoreboard up. But West Indies bowlers also had their share to shine in the innings with debutant Shannon Gabriel and all-rounder Carlos Brathwaite scalping two wickets apiece. LIVE CRICKET SCORECARD: West Indies vs Australia, Tri-Nation Series 2016 Final at Barbados

Australia were off to steady start after opting to bat first with their opening pair Usman Khawaja and Finch to begin with. West Indies skipper Jason Holder opened the attack. Finch and Khawaja were taking turns with boundaries until Holder got his first target in form of Khawaja for 14. Khawaja and Finch managed to put up 28 runs from 1st wicket by 5th over. Skipper Smith entered at No.3 and was mere spectator to Finch’s show who continued his form despite the absence of his opening partner. Until not too long, when Kieron Pollard got his first wicket and dismissed off Finch for 47. Smith and Finch added another 41 runs on board together after fall of early wickets.

The responsibility built up on Smith and George Bailey who entered at No.4. Bailey was off the mark right away with a boundary in the over Finch was dismissed, while Smith was found playing a rather controlled innings finding the right gaps. Smith and Bailey were the only batsmen to secure fifty runs partnership in a crunch situation. Just when they were picking the pace, Brathwaite bowled out Bailey for 22 off 44. Australia’s middle-order savior man Mitchell Marsh played his 37th ODI match and with a boundary and few runs completed his 1,000 ODI runs.  Marsh and Smith also shared a small partnership of 33 runs to turn the tables to their side that did not go quite well Down Under. LIVE CRICKET SCORE: West Indies vs Australia, Tri-Nation Series 2016 Final at Barbados

Gabriel has been excellent throughout the series for West Indies and this time he continued his strong form getting his share of wickets sending Smith and Glenn Maxwell back to the dugout for 46 and 4 runs respectively in 31st over. Marsh remained witness to wickets that kept falling at non-strikers end. West Indies bowlers had some maiden spells as well in their innings first Brathwaite in his third over followed by Sunil Narine getting his as well. Marsh, who was the only hope for Australia, also had to find his way back for 28 with Suliemann Benn scalping his wicket.

Earlier, Australian captain Smith won the toss and chose to bat first against the West Indies in the final of the Tri-Nation Series Final. Question marks over the fitness of fast bowler Shannon Gabriel and skipper Jason Holder were erased in pre-match workouts, allowing the West Indies to name the same team that thrashed South Africa by 100 runs two days earlier to qualify for the final.

On a pitch used for preliminary matches in the previous week, Australia have bolstered both elements of their bowling attack with pacer Nathan Coulter-Nile and wrist-spinner Adam Zampa replacing all-rounder James Faulkner and seamer Scott Boland from the side that got past the hosts in the World Cup-holders’ final preliminary fixture six days earlier. 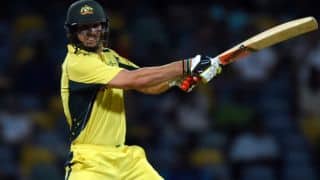