Rookie opener Tinotenda Mawoyo produced a masterclass in concentration as Zimbabwe reached 245 for four at the close of the first day of the one-off Test against Pakistan at Queens Sports Club. 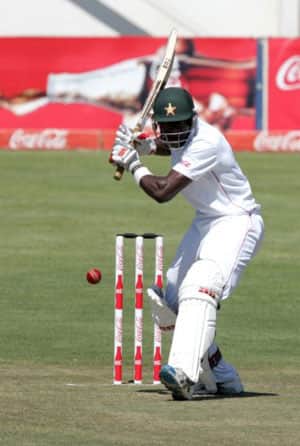 Rookie opener Tinotenda Mawoyo produced a masterclass in concentration as Zimbabwe reached 245 for four at the close of the first day of the one-off Test against Pakistan at Queens Sports Club.

Mawoyo, playing in only his second Test, batted right through the day, scoring an unbeaten and unruffled 82 – his maiden half-century – after occupying the crease for six hours and 21 minutes. He faced 213 balls and struck 10 fours.

He also figured in three significant partnerships as Zimbabwe looked to carry on where they left off when they beat Bangladesh in Harare last month.

But all of the Zimbabwe batsmen had to contend with a boxfull of tricks from Pakistan off-spinner Sohail Ajmal who took three of the four wickets to fall as the home batsmen struggled to pick his doosra.

Pakistan captain Misbah ul Haq made the contentious decision to bowl first after winning the toss. He pointed to some green on the pitch and said he was not afraid to bat last but local wisdom suggests that the pitch will be flat and slow – most captains prefer to bat first to put up a big score.

It also meant Misbah pitched his own very green attack in at the deep end.

With Zimbabwe making tentative steps back into Test cricket, Pakistan have also used the tour to blood some new players – including their two opening bowlers Aizaz Cheema and Junaid Khan, who are both making their Test debuts, and the third member of the pace attack Sohail Khan, who is playing just his second Test.

The three quick bowlers could make no impression on Mawoyo and Vusi Sibanda who put on 71 for the first wicket and it was left to the more experienced spin of Ajmal to put the batsmen under any great pressure.

After the aggressive Sibanda went for 45 to a smart stumping by Adnan Akmal after being outwitted by the off-spinner’s doosra, Ajmal returned after lunch to bowl Mazakadza and trap Taylor leg before. At the close he had taken three for 75 from 29 overs.

Either side of tea, Mawoyo joined forces with Tatenda Taibu who struck 44 – a mix of near runouts and outside edges off Ajmal’s frequent doosras – in their 65-run partnership before edging Sohail Khan to wicketkeeper Akmal.

Mawoyo then added an unbeaten 69 with Craig Ervine who begins again Friday on 38.

The Zimbabweans will be aware, however, that they have just one more recognised batsman remaining in Greg Lamb, who is making his Test debut as a replacement for the injured Elton Chigumbura, before the tail. (PTI)