MCL 2016 will feature many former international cricketers in its inaugural season.

The Masters Champions League (MCL) is all set to begin on on Thursday and will have a lot of world class commentators like Danny Morrison, Aamir Sohail, Mark Butcher and Isa Guha and Mark Howard, who is a noted commentator in Australia. The first match of the tournament will be between Libra Legends and Gemini Arabians, which will be played on Thursday at Dubai. The match will have former India skipper Sourav Ganguly going up against Virender Sehwag. Ganguly, the captain of Libra Legends will have some more legendary players like Jacques Kallis and Graeme Swann. While Sehwag’s team will feature Kumar Sangakkara, Muttiah Muralitharan, Saqlain Mushtaq among others. READ: MCL 2016: Adam Gilchrist-led Sagittarius Strikers unveil team jersey and logo

MCL CEO Zarah Shah said: “A fantastic panel of commentators calling games involving some of the world’s Xtraordinary cricketers is a brilliant addition to the Oxigen MCL. With our key broadcasters carrying the feed in cricket’s key territories, we will have a very wide audience watching all the 18 games of the tournament,” according to a MCL press release. READ: MCL 2016: PTV, Geo Super, Ten, SuperSport sign global broadcast deals

The tournament will take place in Dubai International Cricket Stadium and Sharjah Cricket stadium, which have in the past had the honour of hosting many international matches. It was recently announced that Roshan Mahanama, formerly of the Elite Panel of the ICC Match Referees, who recently stepped down from his position, will be the match referee for the tournament. Mahanama, a former Sri Lanka ODI captain, did the role with the ICC for 12 years from 2004 to 2015. He officiated in 61 Tests, 222 ODIs and 35 Twenty20 Internationals. 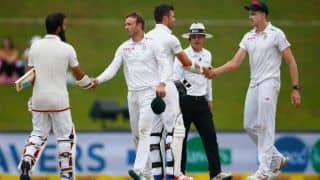 South Africa, England have long trail ahead for ascension in Test rankings