ALS Ice Bucket Challenge, is an activity involving dumping a bucket of ice water on one’s head or donating to the ALS Association in the United States. Earlier this unique challenge was accepted by cricketers like Kevin Pietersen, Darren Sammy, Chris Gayle, Yuvraj Singh. 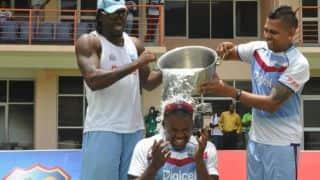 Len Pascoe: There was a hospital ward named after Jeff Thomson and me