Melbourne Stars off to a stuttering start in the first sem-final of the Big Bash League 2014.

In the first semi-final of the Big Bash League 2014 between Melbourne Stars and Hobart Hurricanes, the Stars, batting first have got off to a cautious start, accumulating 33 for the loss of two wickets off the first six overs.

Stars opened with skipper, Cameron White and Luke Wright. But White didn’t last long, before he holed out to Shoaib Malik’s slow spinners in the third over off the match. After scoring two consecutive boundaries off Dimitri Mascarenhas in the second over, he went for one too many, as he miscued a slog to hand an easy catch to Laughlin at cover region.

Matthew Wade, who came in at No 3, too didn’t last long, as he lost his wicket in the sixth over. 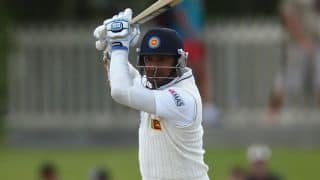