None of the Stars batsmen have been able to accelerate so far.

After winning the toss and deciding to bat first, Melbourne Stars have got off to a very sluggish start, scoring just 75 for the loss of four wickets off 12 overs, against Hobart Hurricanes in the first semi-final of this year’s Big Bash League.

Stars skipper, Cameron White lost his wicket early in the third over of the match to spinner Shoaib Malik as he miscued a slog. His opening partner, Luke Wright was then joined by wicketkeeper Matthew Wade, who too didn’t last long, and scored just eight runs before walking back. Glenn Maxwell then hit a couple of boundaries, but went overboard and holed out to long-off in the ninth over.

Stars have their most experienced campaigners, Brad Hodge and David Hussey in the middle now. They will be hoping these two can up the scoring rate.

The Hobart Hurricanes’ bowlers have maintained a stringent line and length, and thus not allowing the Stars batsmen to hit through the line.

Bringing in spinner Malik in the third over also worked for them. 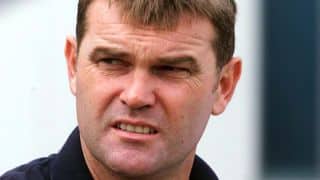