Melbourne Stars take on Perth Scorchers in the second semi-final at Melbourne.

As the knock-out stage of the Australia’s premier Twenty20 (T20) competition, Big Bash League 2015-16 continues, tournament giants Melbourne Stars take on former and two-times champions Perth Scorchers in the second semi-final, at the Melbourne Cricket Ground (MCG) on Friday. Having been qualified for the semi-final convincingly, by finishing second in the league table, they aim to make it to the final for the first-time ever. However, the Scorchers, who finished third, would aim to make it to the final for the third time and eventually become the undisputed three-time champions. With both the teams being considered the powerhouse of the tournament, it is surely expected to be an intense tie.

Considering the performance in the tournament so far, the Stars were off to a poor start in the tournament, losing three matches in the opening four games. However, they played good enough to make a turnaround and were on a winning spree, as they won four games on the trot, thus allowing themselves to be comfortably seated second in the league table.

Scorchers, on the other hand, too had more or less the same result as the Stars, as they missed out on the second spot of the table owing to a poor run-rate as compared to that of the Stars. Overall, it was a decent play by the former two-time champions.

Considering the performance in the previous game, Stars won their previous game against this very same team convincingly by a good margin of 52 runs in an away tie at the WACA in Perth. Considering Stars’ batting performance, it was David Hussey, who played the healthy and match-winning knock of 36, while Rob Quiney and Evan Gulbis contributed with the score of 21 and 25, respectively. However, the Scorchers struggled with their bat as they were skittled for a mere 92 in pursuit of the chase of 147, set by the Stars, with Adam Voges being the top scorer with 46 runs.

Considering the bowling attack, for Scorchers, it was Matt Dixon, who claimed three for 33, while Andrew Tye claimed a couple for 25, while the rest of the bowlers contributed decently, claiming a wicket each. As for the Stars, it was the likes of Daniel Worrall and Ben Hilfenhaus that shattered the Scorchers batting line, with three wickets each for 11 and 17, respectively while Adam Zampa claimed a couple for 16.

Thus, going by the performance in the previous game and the tournament so far, as well as with Stars playing host to the game on their home turf at MCG, things are most likely going to be balanced in the favour of both batsmen and bowlers. Both the teams would aim for a balanced side. Stars would definitely love to stick to their winning composition from the previous game. However, the inability of the top order to fire could possibly see a couple of changes.

Whereas Scorchers would definitely have to work on their batting and a major overhaul could be expected. However, few changes are very likely to happen in their squad. Overall, an enthralling tie is all set to unfold for the fans at the MCG, as they winner gets a shot at the title against Sydney Thunders, who beat the Adelaide Strikers by eight wickets in the first semi-final at the Adelaide Oval on Thursday. 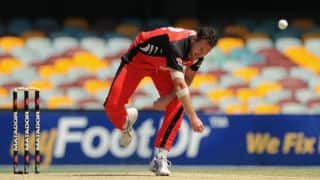