It was a Chris Gayle-show once again as his 47-ball 89 powered Royal Challengers Bangalore to a second IPL final as Mumbai Indians went down by 43 runs in the second Qualifier at the M Chidambaram stadium in Chennai. 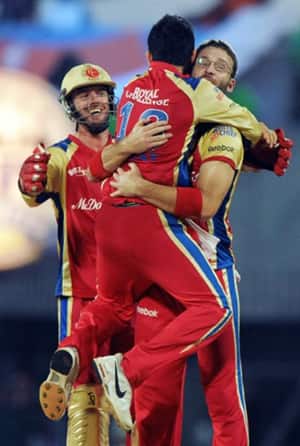 It was a Chris Gayle-show once again as his 47-ball 89 powered Royal Challengers Bangalore to a second IPL final as Mumbai Indians went down by 43 runs in the second Qualifier at the M Chidambaram stadium in Chennai. They now play Chennai tomorrow for a chance to win their first IPL trophy at the same ground.

Chasing 186 for an improbable win on a pitch which had never seen so many getting scored in the second innings of the game to win it, the Mumbai Indians capitulated to a paltry 142 for eight in their 20 overs.

Aiden Blizzard had been responsible for the Mumbai Indians win in their game against the Kolkata Knight Riders with a sizzling century but tonight, he made only 10. Harbhajan Singh, and not Kieron Pollard, was promoted to the number three position and after hitting a six and a four he pulled a slower short ball into the square-leg s hands.

The good news for the Mumbai Indians seemed to be coming in the form of Sachin Tendulkar showing good aggression with the bat, something that he had missed throughout the season. He slapped seven boundaries in his 40 that came off only 24 balls but he was deceived by a superb ball from Syed Mohammad. The ball turned sharply and left Tendulkar stranded outside his crease.

At that stage, the Mumbai Indians were 68 for three in eight overs and while the run-rate was decent, the loss of wickets and the slowing pitch pegged them further back.

The rest of the batsmen failed to keep up to the mounting rate and as a result of throwing their bats around, kept losing wickets regularly as well. Rohit Sharma and Ambati Rayadu departed in the same over to Daniel Vettori and when Kieron Pollard was superbly caught at the edge of the boundary by Abhimanyu Mithun, Mumbai were 89 for six and down for the count.

While Gayle failed to get to his third century in IPL this year, he did enough with the bat to put Royal Challengers into the final of the tournament. Gayle smashed a 47-ball 89 in an innings where most other batsmen struggled to come to grips with the pitch as Bangalore raced off to 185 for four in their 20 overs.

Part of it was Mumbai s own doing. Tendulkar won the toss and surprisingly put Bangalore in to bat. To compound the matter he started off with the inexperienced Abu Nechim, who was immediately smacked by Gayle for 27 in the over, and then dropped opener Mayank Agarwal.

Bangalore raced off to 68 in their first six overs, having lost no wickets. Not that the lifting of field restrictions had any effect on the run-rate as Gayle and Agarwal continued to plunder the Mumbai attack. Rohit Sharma went for 14 in his first over even as at least a boundary was picked off every over till the breakthrough was achieved.

By the time Agarwal was finally consumed for 41, Bangalore had got to 113 in only the 11th over and soon marched to 145 for one in 14. As expected with the Chennai pitch, it slowed down once the ball lost its initial hardness and the quick fall of wickets stalled the scoring rate.

Unfortunately for the Mumbai Indians, despite only 74 runs coming from the last ten overs, the opening batsmen had done enough to push the score on to 185 for four in the 20 overs.