Mumbai Indians will take on Pune Warriors India in the 15th match of the Indian Premier League (IPL) at the Wankhede Stadium today. 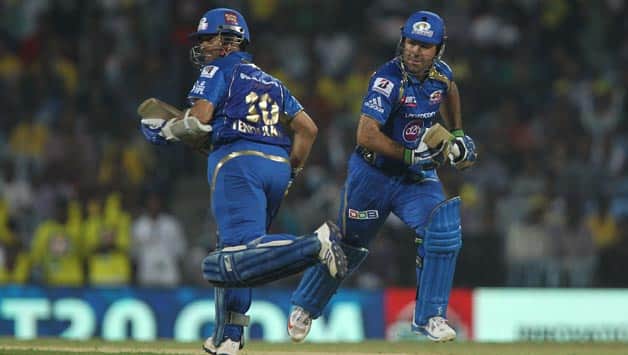 Mumbai Indians will take on Pune Warriors India in the 15th match of the Indian Premier League (IPL) at the Wankhede Stadium today.

News from the centre is that Mumbai Indians have won the toss and have elected to bat first.

While Mumbai will have to address their top order woes which have troubled them in the recent past, the Pune Warriors will be looking to build on the promise of their commanding win over the Rajasthan Royals.

Mumbai openers Ricky Ponting and Sachin Tendulkar have failed to provide stability at the top, and though their failure in the last two games have been covered by terrific performances by Dinesh Karthik and the midle-order, the management would hope that the two legends make significant contributions.

Karthik is Mumbai’s mainstay with 183 runs in three matches at an average of 61 in this tournament. He is the third highest run scorer at the IPL 2013 so far.

On the other hand, Pune bounced back in style to register their first win in IPL 2013 and will hope that it starts a good run for them. Pune’s win against Rajasthan ended their losing streak in IPL, which lasted 11 matches, going back to the 2012 season.

Pune made a poor start to their IPL 2013 campaign by losing their first two games. But they got their act together to register a seven-wicket win over the Royals. The bowlers did a decent job to keep Rajasthan to 145 for five, and the batsmen sealed the deal.

The change in the batting order worked for Pune as Aaron Finch anchored the run-chase. Robin Uthappa and Finch provided a confident start. Though Ross Taylor failed to convert his start into a big score, it won’t be surprising if the Kiwi batsman gets a big score in matches to come.