With another resounding win, Mumbai Indians look the team to beat alongside Delhi Capitals.

Suryakumar Yadav smashed his highest score in the tournament as Mumbai Indians put up a clinical performance against a pedestrian Rajasthan Royals outfit for their third successive win in the Indian Premier League match no. 20 on Tuesday. Yadav hammered an unbeaten 79 off 47 balls to fire Mumbai Indians to an imposing 193 for four after Rohit Sharma opted to bat at the Sheikh Zayed Stadium. (SCORECARD)

In response, Royals were down and out at 12 for three before Jos Buttler gave them a glimmer of hope with a 44-ball 70. However, he did not get support from the other batsmen, and the Royals ended up well short at 136 in 18.1 overs for a 57-run loss, their third in a row. The three changes that they made also did not work for them. (HIGHLIGHTS)

Mumbai’s pace trio was exceptional once again with Jasprit Bumrah being the pick of them, returning with figures of four for 20, the best of the tournament so far. Trent Boult struck twice in the powerplay while James Pattinson removed Buttler in the 14th over.

With another resounding win, Mumbai look the team to beat alongside Delhi Capitals. It is still early days in the tournament but it seems they have already figured out their best eleven on the park.

Earlier, Mumbai suffered a mini middle-order collapse after a good start before late-hitting from Yadav and Hardik Pandya (30 not out off 19) enabled the defending champions to amass 51 runs in the last three overs.

It was remarkable how quickly Yadav overcame a blow on the helmet from Jofra Archer en route to his career-best score in the IPL. He and Hardik shared 76 runs for the unbroken fifth-wicket stand.

Opting to bat, openers Rohit Sharma – 35 off 23 balls – and Quinton De Kock – 23 off 15 balls – forged a quickfire 49-run stand. Mumbai amassed 15 runs in the third over off Ankit Rajpoot, the highlight of it being Rohit launching one into the orbit over the bowler’s head.

Debutant pacer Karthik Tyagi – 1/36 – removed De Kock in his very first over to provide the much-needed breakthrough. Yadav at the other end smashed Tyagi for three boundaries in ninth over. His innings comprised 11 fours and two sixes.

However, leggie Shreyas Gopal – 2/28 – struck twice in as many balls removing Rohit and Ishan Kishan – duck – to leave Mumbai at 88/3 in the 10th over. While Rohit gave a sitter to Rahul Tewatia at long-on, Sanju Samson took a running catch at extra-cover to send Kishan back.

Yadav kept playing his shots and scored successive boundaries off Gopal in the 12th over. It became 117 for four after Krunal Pandya fell cheaply.

Yadav, however, kept launching into the RR attack with great gusto and was particularly brutal on Tom Curran in the 18th over that went for 19 runs. He was ably supported by Hardik, who produced a timely cameo. 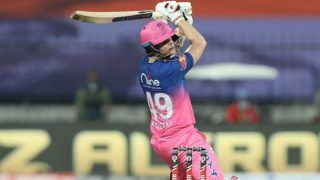 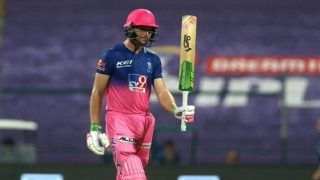 IPL 2020: Jos Buttler Points Out One Big Mistake RR Batsmen Are Repeating That Has Resulted in Defeats