Australia took lunch on Day Two of the Boxing Day Test against Sri Lanka at 238 for three as Michael Clarke and Shane Watson did not let the visitors take any wickets in the first session. 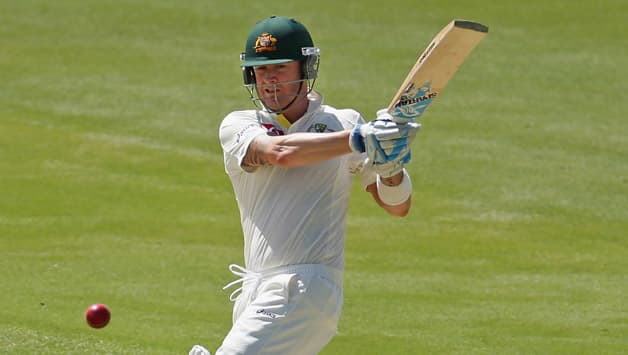 Michael Clarke was unbeaten on 60 going into Lunch © Getty Images

Captain Michael Clarke became Australia‘s highest run scorer in a calendar year as his team ploughed through the second morning wicket less to grind down Sri Lanka in the second Test.

Clarke passed Ricky Ponting‘s previous national record of 1,544 runs with a single just before lunch as Australia tightened the screws on the hapless Sri Lankans in Melbourne.

At lunch, the Australians were 238 for three with Clarke unbeaten on 56 and his vice-captain Shane Watson not out 60 in an unbroken fourth-wicket partnership of 121.

Australia had stretched their lead to 82 runs over the tourists with seven wickets still intact, leaving Sri Lanka looking down the barrel.

Clarke began the Melbourne Test needing 56 runs to break Ponting’s national record and at the break he had scored 1,545 runs in Australia’s final Test of the year.

The Australian skipper, who was in doubt ahead of the game with an injury, has scored a triple century and three double centuries in a trailblazing 2012.

Clarke had a let-off in Rangana Herath‘s 17th over when Kumar Sangakkara missed a tough stumping chance on 54 and then Mahela Jayawardene put down a high chance at slip off Watson three balls later.

Sri Lanka’s injury problems multiplied with paceman Chanaka Welegedara pulling up four balls into his 15th over gripping his right hamstring and he left the field immediately for treatment.

Welegedara went to hospital for scans and left his team a bowler short as Australia continued to build their innings lead.

The tourists went into the second day already without wicketkeeper Prasanna Jayawardene with a hairline thumb fracture suffered while batting in his team’s first innings on Boxing Day. Sangakkara took over behind the stumps.

The Australian pair had few problems in the opening session although Sri Lanka’s quickest bowler Shaminda Eranga clocked Clarke on the helmet with a surprise bouncer which went for leg-byes.